It’d be easy enough for a show all about babes in bikinis to shirk social responsibility and never go deeper than eye candy. But that would be expecting too little from the people of Baywatch. I believe the writers must have felt a moral responsibility in writing this. You can only encourage so much excessive sun exposure before you start to feel a little guilty. And never ones to shy away form tough subjects, they brought us this cautionary tale of skin cancer.

And also Hulk Hogan and Randy “Macho Man” Savage. The lifeguards have to revive Hulk Hogan after he gets hit in the head by a jet ski. And Macho Man is there because he and Hulk are bffs, duh. 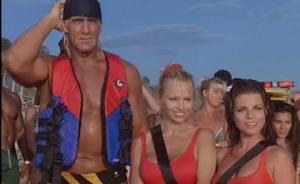 There are a lot of characters in this show and I honestly can’t remember all of their names. There’s a brunette who also is a lieutenant (in the Baywatch, I guess). Since I don’t know her name, I’m going to call her Lt. It’s this lady: 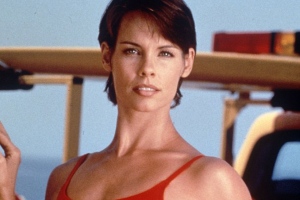 The Lt. has a hot date on a private beach with a doctor. But the doctor notices a sketchy looking mole on her leg. He tells her that there’s no such thing as a safe tan and orders her to come to his office first thing in the morning.

Lt. feels like she cannot ever go outside again, but the Hoff tells her she just needs to wear sunblock everyday and reapply frequently. (Actually, that’s solid advice and there was a time when I did think you could tan safely. So perhaps this Very Special Episode is on point. But now I actually never go outside for more than 15 minutes cumulatively every day and I probably have a Vitamin D deficiency…oops I’m not talking about the episode anymore…)

The Hoff goes straight to the doctor for some answers about the Lt.’s biopsy. So like. That’s kind of a strange thing to do, but okay. And the doctor keeps saying he absolutely cannot break doctor-patient privilege. But isn’t it also not cool to skin biopsy your girlfriend? 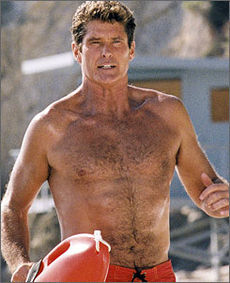 OMG points to the Hoff! He asks the doctor that very question. Usually, I’m the only one asking these questions. I feel like I’ve underestimated Baywatch, you guys. Actually, this is highly informative. Like I’m learning the math behind SPFs. Yasmin Bleeth is only using SPF 8 so the Lt. tells her that if her skin burns in 10 minutes (sans sunscreen) then she’ll only have 80 minutes of protection with SPF 8. Yasmin works 8 to 10 hours at a time (and she’s getting in and out of the ocean during that time!) so she’s have to reapply at least 8 times a day. AND GUESS WHAT? She doesn’t reapply.

Yasmin probably doesn’t absorb all of this info though because she sees the bandage on Lt.’s leg and realizes what’s going on. Also, Lt. says that the most common spot for skin cancer is the back of the leg. Very Special Readers, is this true??? I’m going to need to pause for a moment while I obsessively look at the back of my legs. Okay, nothing but razor burn. We’re good! 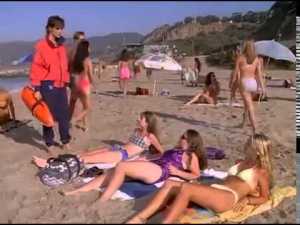 OMG. She actually has cancer. I seriously thought this was going to be a false alarm. Baywatch is serious business, team. I hope this is almost over because I need to get off of this emotional rollercoaster.

Meanwhile, Hulk Holgan volunteers at the “Bash at the Beach,” a wrestling fundraiser to save a local community center. Actually, the fundraiser goes on for so long that there’s two minutes left in the episode when we finally get back to the skin cancer thing.

OMG THE CANCER HAS SPREAD. I am so, so sorry because this is now the end of the episode. I accidentally picked out a multi-episode story arc…but I really, really cannot watch anymore Baywatch. So I’ll just leave you with today’s very special lesson: Reapply your sunblock. Seriously. Also, the Lt. started wearing a really cool windbreaker. Try to wear a windbreaker too if possible.