I have to be honest, were it not for “Blogging from A to Z” I would be doing nothing but binge watching Kimmy Schmidt and eating ice cream right now. But instead I am watching MacGyver and eating ice cream. And yes, I’m largely upset because of MacGyver’s hair in this episode. I’m all about MacGyver’s 1985 hair but I just want nothing to do with his 1989 hair. 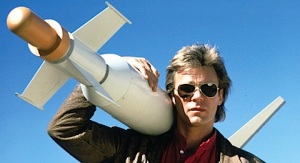 So in this episode MacGyver goes to Africa. And how could we possible transition white people from North America to Africa? Like 3 straight minutes of Lady Blacksmith Mambazo playing over scenes of an ORV (I see you 80’s) driving through an animal reserve. Oh and by the way, just in case you thought you were watching National Geographic instead of CBS:

Yes, this is a very special episode about poachers. My apologies. But I think this might be the most modern of our VSEs because idiots are still going to Africa on the regular and being jackasses. Naturally, MacGyver learns about this poaching issue and can’t help but get involved. After he watches a conservationist shoot a mortally wounded animatronic rhino to put it out of its horn-poached misery, MacGyver all but gives up on searching for the missing guy he’s in Africa to find and dedicates all of his time and energy to conservation efforts.

Also, Cuba Gooding, jr. is in this episode, so that’s a pleasant surprise. (sorry, just took a break to watch this Midnight Special performance featuring, Cuba Gooding, sr. But I’m back now).

Oh my gosh, I apologize. I’m not really following this episode but now apparently some poachers are attempting to hang Cuba Gooding, jr.? Ohhh oh my gosh, so Cuba is the dude that MacGyver has been looking for. And luckily, he shows up to save him from the hanging! Wow, like thank God for dramatic timing or this episode could have taken a much different turn.

K so now I’m back in the game. Cuba is trying to track down a major poacher and has gotten pretty close to finding him. He says his written every records office in Africa and asked for anything that had to do with this poacher. Two thoughts: 1. He wrote an entire continents worth of public agencies?? 2. This well connected poacher didn’t catch on to this one dude asking around after him??

Very Special Lesson: Don’t poach. Also, don’t watch an episode in which MacGyver doesn’t MacGyver anything. The only thing he made was a filter out of a napkin for which to mix that “sugar” with water and then taste the rhino horn. It was boring and gross and now I’m sad. I suggest we all go enjoy our Friday evening and forget this ever happened.

Oh, PS they do catch the poachers.