The Cosby’s are busy preparing for a wedding shower that Denise is throwing for her friend Veronica. Theo is super bummed because he spent all day decorating the house only to find out that the party is strictly women-only. There’s some talk about gender roles (Bud wants Rudy to get him juice because she’s a female and she’s all no way, Bud.) Then Theo and Cliff spend forever hanging shelves because Clair wants to keep them away from the party. Theo tries to read instructions in French. Denise is like yay hanging out with the bride to be! BORING!

Where’s the very special part? Let me skip ahead. We find out seventeen minutes into the show that Veronica is only getting married because she is pregnant. This must be one of the slowest very special reveals ever in the history of very special episodes. And it turns out she did it on PURPOSE! This was a planned pregnancy. She and her boyfriend decided that the only way to get her father’s permission to marry while still in college was to get pregnant.

Wait. Huh? You need your dad’s permission to do stuff in college? Her fiancee had to drop of out school to get full time work but is unemployed! And they have no money! This is how you squander a booming 80’s economy, people. This really stupid master plan. Also, who thought that having a kid would be less expensive than eloping and paying for college? Or maybe getting married and not telling her dad.

Anyway, she’s not a Cosby kid so we don’t have that much to talk about with her. Denise is freaked out by what Veronica told her, so she confides in Clair. Denise is all worried like what if I did something like that? Maybe I can understand it! And Clair is like you would never do that because that is something a crazy, selfish person does.

And you know what, yeah, that is something a crazy, selfish person does. But it’s also something a person who does not know math does. How did these people get into college?

Very Special Lesson: College is expensive, but nothing is more expensive than having a kid.

Typically on The Very Special Blog, we talk about funny things like illegal substance abuse in schools, teen pregnancy, and racism. Today, however, we turn our focus to a serious issue in the child star community: Early Onset Rapid Aging Syndrome. Early Onset Rapid Aging Syndrome is a rare but serious condition that affects many children born into the middle to late stages of a sitcom. Research scientists believe that the origin of this disorder may triggered by the trauma of being born during a “jump the shark” period. However, the underlying root of the problem remains unknown.

Families are instructed by their doctors not to acknowledge the sudden growth of their infants or toddlers into precocious elementary school children. The common belief being that this practice will best protect the children from the stress of realizing that their best childhood years are behind them and the looming pressure to be a sassy eight year old is all that is left for them in this world. Fortunately, most cases of Early Onset Rapid Aging Syndrome seem to dissipate after the initial acute onset, leaving no other lasting complications or continued aging beyond the normal rate. In fact, most of the children appear not to have noticed or cared that they have suddenly aged. Their young minds are, perhaps, unaware of their swift progression because they lacked a general awareness as young babies, existing only as cute props and charming cutaways from their parents’ and older siblings’ drama or antics.

-Little Ricky from I Love Lucy-

-Nelson & Winnie from The Cosby Show-

-Nicky and Alex from Full House-

October 16, 2014October 16, 2014 ~ theveryspecialblog ~ 4 Comments
So it has come to my attention that it’s #tbt on Polyvore (and every other place on the Internet), but the cool part is that today’s theme is fashion inspired by The Cosby Show. While my first instinct was to go with Theo in the yellow shirt, I felt that Denise had the more modern-options.

Remember all of the Cosby kids? How Denise was the cool one, Theo was the funny one, Rudy was the cute one, and Vanessa was the practical one, which meant she got very few of the story lines? (And Sondra was the already adult one that they added later kind of like an after thought.) But finally, in this very special episode of The Cosby Show, Vanessa gets her moment to shine in the sordid tale of a good girl gone bad.

After finishing her chemistry final, Vanessa gets together with her friends to celebrate. When they run out of videos to watch, they decide to play the Alphabet Game with bourbon. I thought that people stopped playing this game in the third grade, but apparently sixteen year-old girls play it too and are surprisingly bad about naming American cities even with 100% sober.

Of course, that sober thing does not last very long, and soon half the girls are sick to their stomachs. For once, this seems like a pretty realistic depiction of first time drinkers because it happened out of boredom and not at a Toga party on a Tuesday night. Vanessa calls Denise and she totally covers for her because she’s the cool one, duh.  But while Denise is upstairs trying to sober Vanessa up, one of the parents calls Clare tells her that all the girls were drinking. Denise (such a cool sister) tries to convince her parents that Vanessa got the flu on the way home, but they already know the truth. Clare and Cliff are uncharacteristically chill and all like, “Vanessa, you’re sick to your stomach and that’s your punishment.” Yeah, well there is NO way that the vomit is the punishment in this household. When Vanessa comes home from school, her parents sit her down to play another round of the Alphabet Game with little Rudy who is in the sixth grade. Rudy ends up with the letter J (which is one of the harder letters) and she totally blanks. 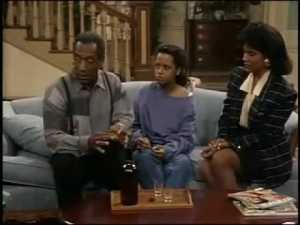 Cliff starts to pour her a shot and Vanessa is all like “Dad, you can’t make your twelve year-old drink.” But Cliff persists and Rudy is all like “ew this is gross” but her parents are all like “These are the rules!!” and, in what looks like some seriously abusive, messed up shit, Rudy downs the shot and everyone cheers her on.

Soon Vanessa, misses a letter and the entire family starts chanting “chug-a-lug,”–a phrase that I have never heard anyone use in real life but now would like to start using. Vanessa caves under the pressure again, and downs the shot which she finally realizes is tea because her parents are not actually psychopaths. Roll credits. Right there. No further analysis or decompression. It’s tea, we laugh, and the end.