I spent so much of my time in the kitchen during 2020 that I enjoy shopping for kitchenware now! I’m obsessed! Here are some things I found on the internet that feel inexplicably important to have in my kitchen:

Last month I was the grateful recipient of The Golden Girls Cookbook. First of all, this book is gorgeous. Every page is trimmed with a cheesecake illustration or the classic GG wallpaper. Packed with full-color photos and peppered with snippets of dialogue from the show, the book is a true keepsake that any fan would treasure. Even more importantly, this cookbook contains truly delicious recipes.

The sections are organized by character with a lovely full profile of each at the top of her section. That said, this can make browsing a little difficult. So you would want to navigate the table of contents if you’re trying to pick out a quick appetizer or dessert to complete your menu.

Most of the dishes featured in this post came from Blanche’s section:
-Cheesy Grits Casserole
-Panfried Okra
-Honey-Bourbon Glazed Carrots

The one exception is the Pot Pie recipe, which came from Rose’s section. (Sorry, Dorothy & Sophia. I’ll have to try your recipes out later!)

A quick note for those making the pot pie (pictured second from left below): I would go easy on the milk/broth requirements. It was delicious but more of a bisque than a pie filling, and even adding more flour wouldn’t have thickened it into the filling I really wanted. If I were to make it again, I would cut back on some of the liquid. On a more positive note, the recipes are well written, which makes it easy to sub out ingredients. For example, my pot pie used shrimp instead of chicken. Stay tuned for cheesecake next time!

Wow oh wow I cannot believe we haven’t spoken since pre-pandemic times, Very Special Readers! I just don’t have it in me to poke fun at sitcoms right now. My whole vantage point has changed! What I wouldn’t give to crawl into Growing Pains and let Daddy Seaver tell me he’s proud of me for not doing cocaine in the bathroom of another suburban home. Can you imagine the LUXURY of that simple life???

Anyway, what I have been doing is getting busy in the kitchen. Yes, yes ME the person who six years ago could not crack an egg! So what happened is I ordered this fancy ice cream bowl from Williams-Sonoma. And then I found out it was backordered. I know there’s a pandemic, so I’m not blaming anyone but finding out something is backordered after you hand over your money is a real bummer. What’s an even bigger bummer is finding out that item is non-refundable even though they cannot actually send it to you. So I was like screw this fancy ice cream bowl, I’m just going to freeze a metal mixing bowl and prove that it works just as well…and you know what…it did!

I used this recipe from the Minimalist Baker. I didn’t have vanilla bean so I just used a little more vanilla extract than the recipe called for. I let my coconut milk chill for 24 hours but I do think 48 hours would have been better. I ended up sacrificing a little fat closer to the bottom of the can because it hadn’t fully separated from the water down there.

Here are some photos for your viewing pleasure:

But listen, I’m not going to leave you hanging. I know you come here for a little nostalgia and a little (okay, a lot of) snark, so I did some research and here are some sitcom related ice cream things:

I learned from Michael’s TV Tray that there are TWO SEPARATE sundae holidays in this country. There’s a lot we’re not doing right but at least we have two separate sundae holidays over here! *crying emoji* *grimace emoji* Anyway, here in America we have the opportunity to celebrate National Sundae Day or, for those of you who prefer your ice cream with toppings, National Hot Fudge Sundae Day.

You can head on over to Michael’s TV Tray to learn all about Saved by the Bell’s girl group “Hot Fudge Sundae” which like serious wtf that was the name? Idk I forgot because I was so distracted by Jessie’s caffeine pill addiction. If that’s not up your alley, maybe you’d prefer to read about the time Marcia Brady worked at an ice cream store.

If you’re like, no no no listen I came here to learn about an entirely NEW show that’s EXCLUSIVELY about ice cream right down to the show name and it NEEDS to be from the 1980s and bonus points if I have NEVER heard of it, then yes, I also have you covered:

Once upon a time there was a television series called Rocky Road. (Pause for laughter.) The series is about a group of siblings, ranging in age from twelve to twenty-two, who takeover the family ice cream business after their parents die. So it’s like Party of Five but much, much worse. According to John Carmen, who was assigned the unfortunate task of reviewing this show way back in 1985 for The Atlanta Journal and The Atlanta Constitution, “Watching these made-for-WTBS comedies is getting to be like shopping the generic food aisle at the supermarket. The unadorned cans and boxes are supposed to contain real edibles, but you can’t help having misgivings.”

Finally, I present to you some of the troubling episode titles from the show’s three season run: “Knives Near the Water”; “Sister Was a Centerfold”; “Jess, You Is My Mother Now”; “Why Frank Senior Can’t Read.” So it seems like there’s a lot to unpack there.

Anyway, hope you’re all hanging in there! If I can make ice cream, you can too!

I know, I know I said I didn’t have time to post. But when you hear that Hanson is scheduling a 25th anniversary tour (coming soon to a city near you!) and you may finally have the opportunity to hear your favorite song of all time played live, you have to RE-PRIORITIZE. Plus, I’ve seen this episode before so it shouldn’t take long. Back in 2013, Hanson stopped by Cupcake Wars to promote their album “Anthem.”

Taylor said, “I think you took the challenge and actually wove it into a whole flavorful cupcake that I would actually want to serve to someone. I can see this at the after party to launch the tour.” 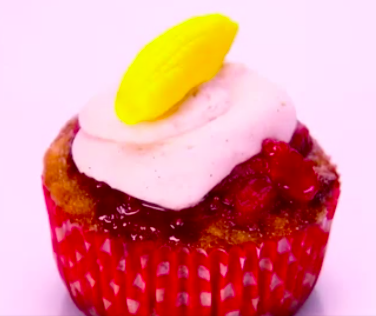 Zac said, “This cornbread felt like an Oklahoma meal to me. Oklahoma’s kind of Southern food, barbecue, cornbread, and so the butter cream to me tasted like the way people put butter on their cornbread.”
Cupcake 4 – Cornmeal & Grit Cupcake, Filled with Strawberry Glazed BBQ Pork, Strawberry Frosting, and Garnished with Strawberry on top.

Taylor said, “It was great to have the barbecue in there. I thought that was really creative.”
(Sadly, this was the losing cupcake. Sorry, cupcake.)


Just in case any of this sounded at all appetizing to you, here are some recipes from the episode!

Taylor said, “I think there’s a lot of creativity, but it doesn’t particularly represent this album. It looks a little bit more like a country band. I’m not sure you nailed it.”
Cupcake Set 2 – PB&J, Coffee Liquor and White Chocolate Ganache, Chocolate Stout Beer 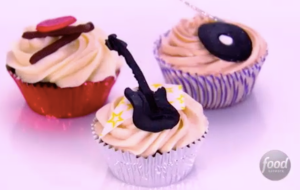 Zac said, “This is like the worldwide smash hit. The flavors are great. And I think you did a great job.”

Round 3:
The Challenge – The 1000 Cupcake Display!
Display 1 – A guitar on a stand with a spinning record that shows the name of their record in lights. 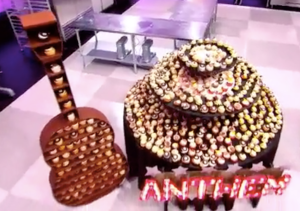 Display 2 – A Hanson stage with a drum kit, piano, and electric guitar sitting on the stage. The name of the album will be above the stage, big, and in red. (THIS ONE WON!) 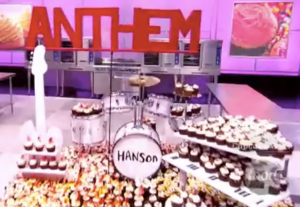 Now, back to our regularly scheduled programming.

I’m going into uncharted territory here, Very Special Readers! This post covers food-blogging. Is that what you call it? Or cooking blogging? Cooking is not something I know much about, but if anyone can pull me out of my blogging comfort-zone then it’s Jackée Harry and Betsy Randle.

I’m more of a Cupcake Wars fan myself, but Chopped drew me in with this “sitcom mom” episode. Shout out to my boyfriend for interrupting my Disney Vacation to tell me this was on TV, but I had to track down the youtube link on my own when he falsely told me it was “live TV.”

What I would have made: TV Dinner with diced mushrooms mixed in. Spinach and Sour Cream pudding. (Maybe saying cooking was “not something I know much about” is vast underestimation.) 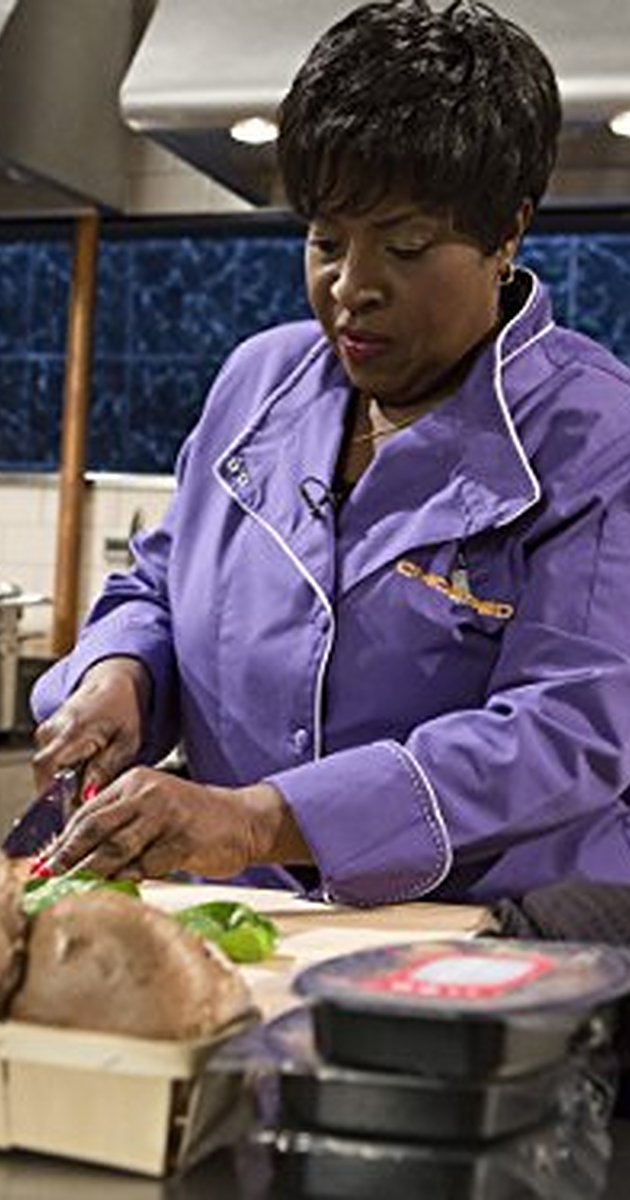 Backstage: All of the moms are pretty disgusted that they had to use TV Dinners. Tichina hates this especially because she is competing for her Lupus charity and learned how to cook with fresh foods when her sister was diagnosed.

Who Got Chopped: The judges chopped Jo Marie because her mushrooms were under-cooked and she dumped too many spices into the stuffing. But Jackée mentioned earlier that she loves Jo Marie’s cooking, so I feel like this just wasn’t her night.

What I would have made: Carrot and celery soup with a french toast steak sandwich.

The screw-ups: I’m pretty sure that Tichina is drunk on wine at this point and she’s also trying to throw Jackée off by gas-lighting her into thinking she messed up her carrots. Betsy forgets to use the cream of celery soup. Jackée mistakes cilantro for parsley and uses it as garnish. So really, I’m feeling like maybe the sitcom moms don’t know much more about cooking than I do.

Who Got Chopped: Tichina got chopped for basically not altering 75% of the ingredients from the basket.

The Dessert Round:
The Ingredients: Tiramisu, bananas, strawberry sauce, and almonds.

What I would have Made: Yuck, banana! I would have pureed the heck out of that banana with the strawberry sauce to off-set some of the banana yuck. Then I’d deconstruct that tiramisu and food-process some almonds to mix into it. And then I guess I’d make some kind of tiramisu almond strawberry parfait thing. 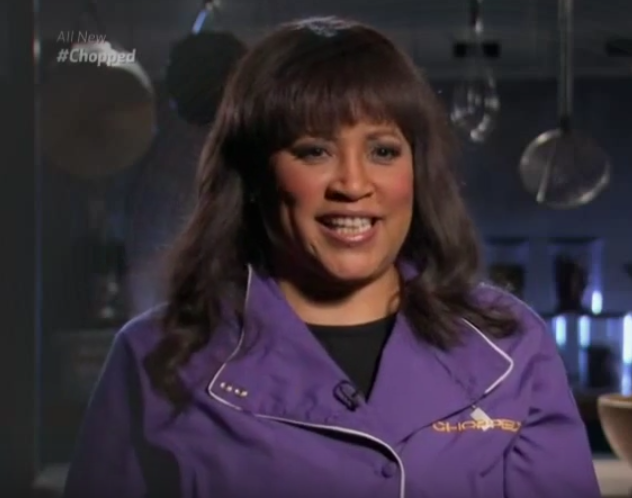 What they made:
Betsy- Vanilla ice cream sundae topped with a dollop of tiramisu and almond goop
Jackée- Off-beat banana flambé au strawberry

Who Got Chopped: Betsy. Turns out only one of the judges liked her goop, but ultimately they didn’t like that she left the bananas as “just bananas.”

The Winner: Jackée! And she’s giving $10,000 to the Thurgood Marshall College Fund.