Today, I am going to change things up a bit. This is not a show that does very special episodes. I know. You’re devastated. I’m sorry to have disappointed you. But I have a good reason for changing things up today on All Hallows Eve. Today, I bring to you my favorite Halloween episode of all time. That 70’s Show does a perfect homage to Hitchcock in a way that could be genuinely entertaining if you knew nothing about Hitchcock, but (like all good homages) is all the better if you do. For those of you who are not familiar with That 70’s Show, it’s a sitcom set in the 70’s (duh) about Eric Forman and his best friends, who always hang out in his basement. I always liked this show because this felt like a group of friends that I would actually want to hang out with. Everyone seemed cool and like a total loser at the exact same time, which is how I prefer my friend group interactions to be.

But before we get to the plot of the episode, I have to point out the awesome theme song. The regular theme song is remixed to include an ominous pipe organ, while the credits roll across the dashboard like dripping orange candle wax.


Okay now on to the plot! It’s no mystery what the subject matter of this episode is because the writers have Kelso scripted to point it out to the audience in a jokingly meta manner at the beginning of the episode.

So this is the point when things could have been like, “Oh man, they’re just going to make a ton of movie references, agh!” But what instead of being cliche, this episode seamlessly weaves together some of Hitchcock’s most classic works while never losing its own style. You see, it all starts when Fez, dressed as Dr. Frankenfurter from The Rocky Horror Picture Show steals Eric’s bouncy ball, and Eric chases him onto the roof to retrieve it. Eric nearly falls off the roof, but its Fez who gets hurt instead–leaving Eric with some James Stewart-style Vertigo.

Eric’s mom, Kitty, wraps Fez’s ankle in an ace bandage, but he must keep off it and is confined to a wheelchair. Due to the fact that he is so scantily clad, she covers him with an afghan blanket, so now he looks remarkably like James Stewart in Rear Window. Left alone in Eric’s room, Fez and Hyde decide to spy on their friend Donna’s hot mother, but instead they begin to suspect (of course) that Donna’s father has killed her.

But it’s not just the kids who are embroiled in their own Hitchcock-ian thrillers. Kitty has agreed to feed her eccentric neighbor’s birds only to find cages full of crows when she arrives. Sh

e opens one of the cages and a crow immediately flies out and into the closed window. Kitty picks up the dead (stunned?) bird, but this only exposes her to the other crows and they seems to collectively label her as their archenemy. She flees the house and bribes her daughter, Lori, to return and feed them. Lori also fails to feed them after one of the birds poops on her. She runs away as well, traumatized.

Meanwhile, back at the Forman home, Kelso sits down to watch some television in the living room with Eric’s dad, Red. Here he foreshadows another reference by mentioning to Red that he has seen the movie on TV before. “See, those

guys think Cary Grant’s a secret agent,” Kelso explains to Red, describing the case of mistake identity that drives the plot of North by Northwest. Shortly thereafter, someone rings the doorbell. Red is certain that it is the paperboy, whom he has not paid, and refuses to answer it. Kelso, however, cannot leave a door unanswered, so he goes to speak to the paperboy. He tries to reason with this very surly kid, but the kid insists he pay him. He assumes that he lives in the house and is a member of the Forman family. Kelso tries to tell him that he doesn’t live at the house and that he is not a Forman, but he just so happens to have borrowed a shirt from Eric that has his last name on the back, so now he’s taken on the role of Cary Grant in North by Northwest.

This paperboy is super aggressive, so he begins to stalk Kelso in order to get his $2 payment. This culminates in an altercation with a toy airplane in the Forman’s driveway. That toy airplane just so happens to crash into a painting in the Forman’s garage that looks remarka

es into. Beaten up by a child, and having ruined his suit, Kelso goes inside the Foreman house to take a shower. While Kelso is in the shower, Lori comes home to wash the bird poop off of her arm and is furious when she finds Kelso using her shower. In a blind rage, Lori attacks him Norman Bates-style but with a back scrubber not a knife. This is a sitcom you guys, don’t worry. However, it’s only when she flushes the toilet that Kelso shrieks Janet Leigh-style and knocks her red tinted shampoo over. Then the camera pans to see the red liquid circle the drain. Lucky, for Kelso his Psycho shower scene ended a lot better than Janet Leigh’s.

Since Lori has been no help to Kitty in the bird situation, Kitty has no option but to return to the spooky apartment on her own and feed the birds herself. However, when Kitty arrives she sees that all of the birds are now out of their cages and ready to kill her. Luckily, there’s a phone booth in the living room, so she dashes inside like Tippi Hedren in The Birds. After screaming in terror, trapped inside the phone booth, Kitty awakes to find that it was just a dream. But unlike most “just a dream” episodes, only the phone booth part was a dream.

What can I say? I like a good homage. 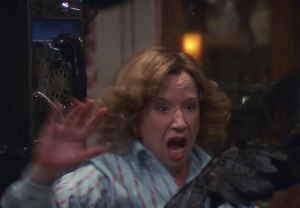