During the summer, my office gets a bit slow on Friday’s. Sadly, those quiet times are almost gone with the Autumn wind, but I’d like to share with you what I did last Friday in my downtime.

A day or so earlier, I saw an Etsy store called Nerd Girl Wensi featured on a Buzzfeed list. I decided to checkout the store because I liked what I saw in the list, and that’s where I found these: 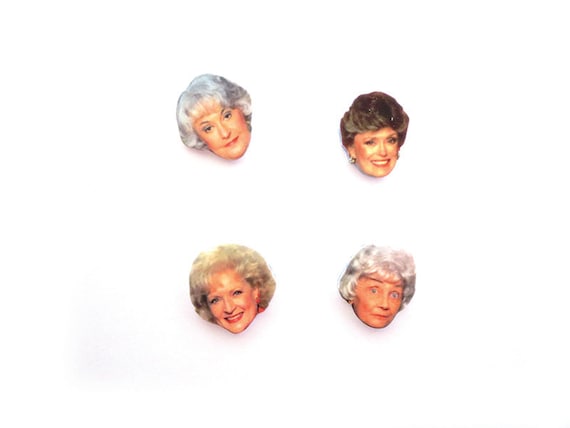 I was like, OMG I need some of those Rose Nylund earrings! So I selected the character from the drop down tab, and then I noticed that I had to select a “type.” I figured this was like hook or stud, but then I found that it’s a whole gigantic list of things, including “game piece.” “Oh my”, I thought to myself, “what could you possibly do with a set of Golden Girls game pieces?” So I came up with this:

The Golden Girls: Catch that Cheesecake!

Dorothy, Sophia, Rose, and Blanche had a delicious cheesecake stashed in the fridge, but someone has stolen their late night snack! Now, they must find the culprit and determine the hiding spot. The road before them will be treacherous. Rose and Sophia will tell many stories. Will Dorothy become the victim of her own biting sarcasm? Will Blanche manage to stay on task or abandon the search for a sailor/doctor/random man at any of the search locations? The journey will be even more difficult because Rose cannot recall which cheesecake she purchased. Was it the classic, the pistachio, the banana cream, the double chocolate fudge, or the strawberry? It’s up to you to help guide them through the search for the ultimate cheesecake!

The Ghost of Sal–Sophia’s deceased husband

Dreyfuss-the stray dog that Rose found at the supermarket

The Lanai (the sunporch)

The set of Grab that Dough! (The game show where the girls won nothing but a lifetime supply of soup.)

This is clearly incredibly influenced by Clue. This inspiration is largely due to the fact that it’s the only board game I truly understand on a mechanically level. I also wanted to make some of the spaces gold, but I ran out of time. I thought it would be cool to have “Golden Ticket” cards that you picked up like action cards if you land on the space. So they could say things like Dorothy sabotaged your story with her sarcasm, lose a turn. Or Tell your own St. Olaf story and advance two spaces.

Here’s my game board. The ends are a little curled up because I had to draw it on a piece of printer paper, but you get the idea: