Ladies and germs, I bring you the the most screwed up thing I have ever written

about on this blog. In light of how I’ve dedicated the shortest month of the year to the 70’s, this week’s very special movie of the month is the most very special movie of them all, Go Ask Alice. Based upon the “anonymously” written (by Beatrice Sparks) “non-fiction” book of the same name, this pack of lies tells you all about the freaky-deaky world of drug addiction.

As you know, all drug-addicts are friendless losers, so we start off this movie by having “Alice” establish that she is sad. She’s also concerned about boys becoming “instant sex maniacs,” and her mother tells her to “be aware of her own desires too.” YUCK where is the acid?

“White Rabbit” is playing, so things should start to get good soon. Eventually, Alice makes friends with Beth. Beth is a super nerd, but it’s okay because she’s smart. It’s not okay that Alice is a super nerd because Alice is not smart. This is the stupidest thing I’ve ever heard because being a super nerd is awesome. Then Beth goes away to summer camp and Alice is lonely and bored.

Alice meets a cool girl from school at a clothing store and the cool girl invites her to a party. Here we go! This is not a drill, people! They play a game called “button, button.” This game is really just that everyone but one dude gets soda with acid in it. Everyone knows the game but Alice, so she’s super naive and doesn’t know she’s tripping until the cute boy next to her explains everything. At this point, she’s become a drug addict. Obviously.

pregnancy scare.” Additionally, she is now anorexic. That’s another bi-product of acid addiction. But being an addict, really improves Alice’s fashion sense.

That fall, Alice celebrates her sixteenth birthday. She and her friends do lines of coke just moments before her parents bring in the bday cake. Only Alice’s brother kind of gets that something is off whereas Alice’s parents are so naive that they’re just like hah teenagers are weird! Soon feelings become too much for Alice, so she starts balancing out her days with pills.

When one of their friends gets arrested, Alice and the cool girl (what’s her name?) take over as drug pushers at the junior high. And now it’s time to try Speed! Additionally, Alice’s boyfriend is only into her when he is high, which is a major bummer. Then Alice really compromises her morals by selling drugs to a twelve year old who is pushing them into grade school. 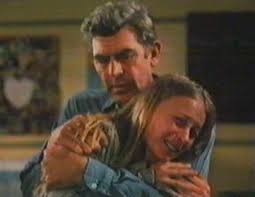 Then Alice meets Andy Griffith at a Catholic mission. She’s been referred there by The Diggers (so 70’s). She gives him her diary because that’s pretty much her only way to communicate at this point. Andy Griffith helps her keep clean, and it comes to light during all of this that Alice has also pretty much sold Chris into sex slavery because she wanted drugs/didn’t want to be a sex slave herself. (We do hear from Alice that Chris eventually makes it home, but we never see her again.) The moral of this story is that you should always listen to Andy Griffith. Anyway, Alice gets home and everyone seriously tries to get Alice to do/sell drugs again. Someone even passes her pills while handing back a graded paper. Beth won’t invite her to her party because of her “reputation.” The girl can’t win!

Things break down into a weird altercation, in which Alice is babysitting an infant because the original sitter did not show up. Then the original sitter rushes in from a rainstorm, high out of her mind. She freaks out and attacks Alice for stealing her job. Alice calls the girl’s mother because she’s about to straight up murder her, and the next day at school all of the drug addicts harass her. Then the crazy girl from the night before (who is at school right now??) tells her that she’s going to trick Alice’s little bro into doing drugs by giving him “candy.”

While Alice is babysitting again, someone doses her coke. The level of access that these creepy child addicts have is phenomenal. Alice ends up in the hospital and can hardly communicate. It was time to move to a new town like two months ago, parents!

Anyway, things do end up pretty good for Alice. She goes to rehab, rekindles her friendship with Beth, and dates a really nice college boy. And then she dies. Of an overdose. And no one knows if it was murder or not.

Very Special Lesson: I think the real message of this movie is not that you should avoid doing drugs. I think it’s that you should never drink a soda that you didn’t open. First of all, it is rude to take open drinks from homes where you are babysitting. And secondly, that drink may be full of way too much acid for anyone to possibly handle. Also, if your parents won’t let you transfer out of the school where people are trying to murder you, then it’s time to run back to California and hang with Andy Griffith.