I’m so fatigued right now that my brain is probably working at like 25% percent (yep, that just happened) capacity, so a show entitled “Mind Pollution” feels just about right for today’s very special episode.

On another note, I’ve become the “Customer Wow Champion” and recently achieved 200 bonus points by closing out 10 tickets with a rating of “Awesome” in a week. In fact, I shudder that I just shared that with you because I fear I will have jinxed my streak and it’s such a major point of pride for me right now. What is my life that being “Customer Wow Champion” could make or break my self-esteem?? There’s so much pressure when you’re at the top! Things can only go down from here!

But for now, we turn to Captain Planet. For those of you that grew up under a rock (or those younger millennials craving the nostalgia of the 90’s you can’t remember, hello welcome) Captain Planet was an educational cartoon all about saving our great and environmentally-threatened home, the planet Earth. But it was the early 90’s and we’d all been conscripted into the War on Drugs. And that’s how we got this episode with a cartoon teenager buying drugs from a man with a tale in the back streets of Washington, D.C.

This is a drug called “Bliss.” Now, Bliss is a kick-ass drug name and sounds like something I would definitely want to sign-up for. But do not judge a book by its cover because this shit is scary. I’m pretty sure this dude, Boris, tried Bliss once but he’s suddenly dressing like an extra from Miami Vice. He’s also got a pretty nasty gash on his head–presumably from drugs–which his cousin (Linka, for the Captain Planet connection) tries to help him clean up. But he accidentally knocks it out of her hand (again, from drugs) and it lands in the middle of the stove where their uncle/father is preparing blintzes. The moral of this story is that drugs will set your kitchen on fire, and if Captain Planet taught even one child that very important lesson, then this episode was all worth it.

Soon, Bliss-addicted Boris is back in the alleyway buying more drugs from the rat-man (theVillainous Skumm) because Linka threw his drugs down a storm cellar and now he’s illin’ like nobody’s business. Boris claims that Bliss can make you happier than anything else in life and the rat man agrees, saying that “when you’re used to Bliss, anything else is a real pain.” I’m thinking that Bliss must have been an early form of Crystal Meth, especially because Boris is now considering trading his cousin for more Bliss. Yep, that’s right. You thought you were getting an episode about drugs and you’re actually getting a lesson about the dangers of human trafficking.

You see, Boris unwittingly revealed to the rat-man that Linka is a Planeteer and now the rat-man will only sell Boris the Bliss in exchange for Linka. But what does this all have to do with the care-and-keeping of Earth, you say?? Well, as Whoopi Goldberg explains to the rest of the Planeteers, “It’s the most insidious kind of pollution. These kids are polluting their minds and bodies with drugs.” If you thought chlorofluorocarbons ruined the ozone layer, then you were wrong. It was drugs. And we’re all responsible. 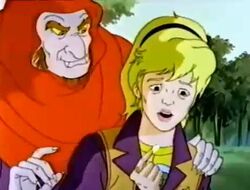 Luckily, the Planeteers head to Washington, D.C. to save Linka (who has been force-fed Bliss) from the rest of the addicts/zombies. I mean we’re talking straight-up apocalyptic scenario here. The Planeteers are throwing fire and water like nobody’s business, while the addicts wander around like the living dead in search of more Bliss. The Planeteers need Captain Planet to get out of this. But they can’t call him without Linka, and she’s too high on Bliss to help them.

The Planeteers barricade themselves in a building by placing a thin branch through the handles of some double glass doors–that ought to hold them. Meanwhile, Linka has snuck away to let Boris into the building (so he can provide her with more drugs). Boris attempt to jump through the glass window and starts bleeding out from both wrists (and only wrists, he’s totally unscathed otherwise). This is insanely dark for a children’s cartoon. Luckily, the Planeteers are on-point with their tourniquet techniques. Then they all evacuate the capital. Okay, well maybe they’re not that great at first-aid because Boris dies mid-evacuation. But this is enough to sway Linka to call Captain Planet with the rest of the Planeteers. 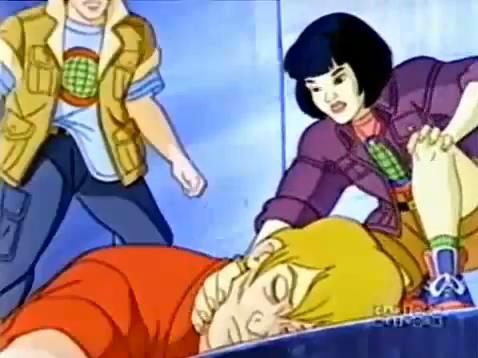 The Planeteers support Linka as she goes through a harrowing drug withdrawal. Meanwhile, Skumm accidentally eats some of his own Bliss, ending the episode with a soliloquy, “I’ve polluted myself. No! No!” Alls well that ends well.

But seriously, this is the freaking Grimm’s Fairy Tale of Captain Planet. I feel like I need to curly up with a teddy bear and hide from the scary drugs of America. My friend is an emergency room Social Worker and she literally just posted a PSA begging people to stop doing K2. The appeal of synthetic marijuana is just so lost on me. I know drugs get out of hand, but I feel like ultimately drugs are supposed to be fun. Like even if you’re beyond the point of recreational use, I feel like they’re supposed to provide you with at least a modicum of enjoyment and yet it seems like everyone who uses K2 is just electing to put themselves into this very, very awful episode of Captain Planet.

Very Special Lesson: If you chose to do drugs, do not chose to do any drugs that look even vaguely like they share any of the highs depicted in Captain Planet, Jem, or Cartoon All Stars to the Rescue. You people, are making an honest woman out of Nancy Reagan and I weep for us all.