90’s children rejoice! Nickelodeon has finally indulged us and plans to rerun the stories of our youth on a new segment called “The Splat.” Beginning October 5th the programming block (including VSB favorites Salute Your Shorts and Clarissa Explains it All) will air between 10 pm and 6 am to perfectly align with your quarter-life-crisis induced insomnia. For the well-adjusted of you who have to go to sleep in order to make it to your jobs on time, you’ll probably need to DVR this.

I searched for an eternity just now and couldn’t find the article I read earlier this week that basically explained why millennials love the TV shows of our youth so much. It was a lot more profound than this, but it boils down to the fact that we lack the financial resources to meet all of the “adult” milestones we feel like we should (i.e. house-owning, loan paying-off-ing, marrying and acquiring offspring, etc). Basically, we’re comparing ourselves to how we imagined adults to be when we were youngsters and we’re failing because we don’t live in that world anymore (see: mountains of student loan debt et al). We’re also overly educated, underemployed balls of anxiety who’ve put tremendous amounts of pressure on ourselves under rules that don’t exist anymore only to also be told by society that we’re whiny, extendedly-adolescent people.

And you know what, that makes us feel bad. It literally feels like being kicked when you’re down. I’m sorry for the douche bags who make our generation look bad, but most of us are quietly spinning our wheels and trying to figure out how to adjust. So we watch TV shows (which costs way less than a vacation) that remind us of a simpler time. Also, I know I joke about a lot of the stupid crap messages these shows were sending, but their hearts were in the right place. And some of them (Boy Meets World, Clarissa Explains it All, The Secret World of Alex Mack) had really great writing that I can still legitimately enjoy today. 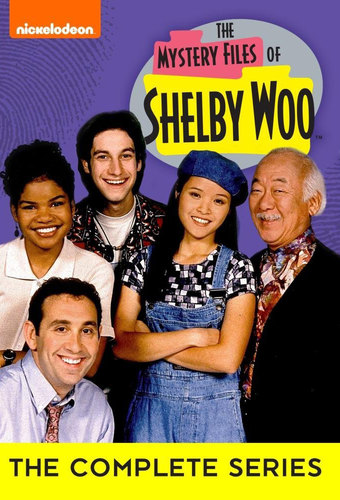 So that was all a very long introduction to say that I feel like The Mystery Files of Shelby Woo was wrongfully overlooked on this lineup. Shelby Woo lived with her grandfather (Pat Morita from Happy Days and The Karate Kid) in Cocoa Beach and she solved mysteries. But we’re not talking dinky The Adventure of Mary-Kate and Ashley mysteries. We’re talking like genuine thrillers. Okay, well like thrillers for kids, but I found this show to be like a 7.5 on a 1 to Are You Afraid of the Dark? scale.

For example, the episode I’m watching right now (The Haunted House Mystery) starts with a bunch of cuckoo clocks going off and an old lady screaming alone in the middle of the night. That’s genuine horror, right there. But I could always trust that Shelby would solve the mystery and put things right. She finds out about this scary case when the old lady (she’s no longer screaming at this point) checks into her grandfather’s B&B and says she likes her house but she can’t deal with the haunting. Shelby is fearless so she spends the night in the haunted house and solves the mystery. I’m not going to spoil it for you (like I do every other episode of everything) because there’s no very special lesson. It’s just a cool show. And I’m hoping “The Splat” decides to air it on Halloween.

9 thoughts on “The Mystery Files of Shelby Woo”