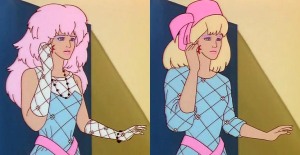 So happy to be catching up with my girl Jem. Over at the starlight house, Ba Nee is super sad because she has no father. So Jem goes down to the record studio to find the drummer in Riot’s band. Ba Nee once thought this drummer was her father, so they’re hoping to use him as a surrogate dad. (Woah, keeping it real, Jem.) Hoping to make Ba Nee feel better, the studio musician heads back to the Starlight House with Jem.

But Ba Nee is way past wanting to hang out with a fake dad. She even says she “doesn’t want to live.” Woah, so now we learn about how to take Ba Nee to the hospital, right? Nope, no, cue music video about “family.” 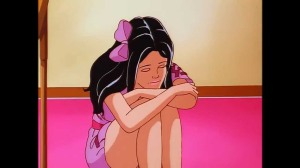 Ba Nee can’t understand why her real father won’t come to the Starlight House to pick her up. And Jem decides to comfort her by saying hey, “we don’t even know if your father is alive.” So Jem & The Holograms start a missing persons investigation. All they know about Ba Nee’s father is that he is a Vietnam vet who has red hair and is named Martin.

Jem goes to Riot (again for help). Turns out he’s a military brat and his dad is pretty high up. So the military prints a list of possible red-headed Martin’s for Jem. And there are only 3 possible names! Can you believe it? Neither can I.

The Holograms split up across the country to check out all of the Martins. Tons of people are willing to help them as soon as they say they’re trying to help a little girl. A doctor even gives them some guys home address!

So things get really, really sketchy here. I’m like totally freaked out and I feel like this almost needs a trigger warning. Kimber has quite obviously found the right father. But Jem brings back some creep-0 who seems to be pretending to be the father. This pretending also seems pretty obvious, but Jem is slow on the uptake and let’s the fake father take Ba Nee from the Starlight House. And he takes her to a freaking abandoned zoo. WTF Jem. This is giving me nightmares as an adult. If I’d seen this as a kid I would have straight up cried.

Ba Nee has now been kidnapped and is being held captive in an abandoned zoo exhibit. This is a freaking horror film, you guys. The creep-o calls Jem and demands 1 million dollars in exchange for Ba Nee. The real father uses his army training to try to rescue Ba Nee from the abandoned zoo exhibit.

And then he has a freaking Vietnam War flashback in the middle of the abandoned zoo. This is the heaviest children’s cartoon subject matter I have ever seen in my entire life. But this flashback actually turns out to be the best thing to have possibly happened. You see, the real father has been suffering from amnesia. And aside from the intense war moments, he also begins to remember Ba Nee’s mom.

Jem uses synergy to fool the creep-o into thinking a gorilla is chasing him. Then he runs right into Ba Nee and her real father (who has rescued her). Her real father also captures the creep-o. And then they have a big party to celebrate that everything turned out okay! Even The Misfits show up to wish Ba Nee well. Like seriously. They’re being nice to her.

Very Special Lesson: Wow, there’s just so much to unpack here. I think the most important take away from this is not to assume someone is your father without extensive genetic testing on the front end.

2 thoughts on “Jem: A Father Should Be”