Oh my gosh this episodes are so long. This makes me long for the days of two-part Hawaiian episodes. But here are some key points from each of these 90-freaking-minute long trips to Europe.

The Facts of Life: Mrs. Garret and the girls take trips, separately to Paris. Mrs.

Garrett studies French cooking and the girls are supposed to be studying at one of Eastland’s sister schools. But these girls decide to runaway from the school because it’s too “rigid” and “structured” like most boarding-schools would be. But they are used to doing whatever the hell they want. Out of financial necessity (and the fact that the school has their passports) they crash with Mrs. Garrett. And she, as per usual, lets them get away with this insanity. Jo spends the entire trip trying to walk from Paris to LeMans to see car racing. She meets a random cute guy and, in what should be the beginning of an episode of Criminal Minds, hops on the back of his motorcycle and spends the night with him in a hotel, sharing a bed. But this is The Facts of Life so it is totally innocent and he’s a perfectly upstanding gentleman. Mrs. Garrett struggles to cook well enough for the French but she meets a French boyfriend and he helps her ace her test. Natalie and Tootie stalk a writer that Natalie thinks is cool. They didn’t even give Tootie her own plotline. Blair decides she can have fun by herself without trying to get guys to pick her up. And Jo, in the only remotely interesting story-arc of this 90-minute sans-laugh track drudgery, shares a chaste kiss with that perfectly upstanding gentleman. Oh and she never makes it to LeMans because he has to go back to Paris early for work and she decides she would rather be with him. Who are you, Blair? 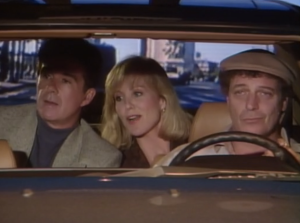 Growing Pains: Mike gets a job selling travel tours for a company called VaVaVaVoom. He sells so many tours (including one to Maggie & Jason) that they give him a free trip to Barcelona on a sorority tour. Maggie & Jason go to Paris at the same time that Mike goes to Barcelona and Maggie’s parents babysit the rest of the kids. The first night in paris, Maggie comes down with appendicitis and spends the rest of the trip in the hospital. She and Jason see literally nothing of Paris, but he does manage to track down the restaurant where he proposed to her. And the chef caters a romantic candlelight dinner for them in her hospital room.
Meanwhile, the travel company has gone defunct and Mike and this one other person on the sorority tour (who turns out to have thought it was some kind of history tour) are the only tour members rich enough to afford Barcelona on their own. 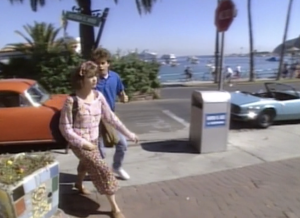 They contact the airline and learn that they can get some kind of value out of their otherwise worthless tickets if they can make it to Paris. So they set out across Spain hating each other in a poor-man’s When Harry Met Sally only to share a not-so-chaste kiss when they finally make it to Paris after having stolen a crap-ton of coins from a public fountain. That’s right, The Facts of Life is more chaste than a born-again yet unmarried Kirk Cameron, so you can all update your chastity rulers now. Somehow they all manage to have a good time.

Point Breakdown:
Overall Plot–This hands down goes to Growing Pains. It’s not even much of a winner but The Facts of Life was a snoozefest.
Music–Also, Growing Pains on this one. Their elevator-music soundtrack was slightly more highbrow than that of The Facts of Life. Plus, I did enjoy the meta-humor of Jason signing the Growing Pains theme song to Maggie in her hospital room, especial since Alana Thicke wrote the song. 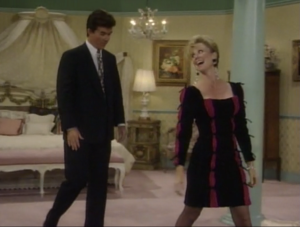 Vacation Attire–Growing Pains again. Mostly because Maggie managed to spend like 45 seconds wearing an awesome dress before she got appendicitis. And Mike and his lady friend managed to look amazing for days wandering throughout Europe and sleeping on benches.
Integration of European Setting-I’m calling this one a draw. They both have a lot of scenic pictures happening and I feel like that’s the only thing that can remotely justify the length of these episode arcs.
However, I am subtracting a point from Growing Pains because everyone is speaking Castilian instead of Catalan in Barcelona. And they’re also all speaking Castilian incorrectly. There’s even a ridiculous part in which Mike’s supposedly fluent travel buddy calls Carol, who is also supposedly fluent, and Carol says “Estás Carol.” Like what, no YOU’RE Carol, Carol. What are you saying??

Growing Pains: Vacation Attire + Music + Overall Plot – Bad Spanish = 3 points
The Facts of Life: 0 points, go back to Peekskill. (But in all honesty I guess they did “integrate the European setting” so fine 1 point but it was still basically the worst thing I’ve ever seen.)

Next Week on The Very Special Blog: Blossom vs. Family Matters