There’s really no way to prepare yourselves for the awesomeness of this, Very Special Readers. Saved by the Bell and The Golden Girls both have EPIC Murder Mystery Weekend episodes and we will now place them in direct competition with each other.

But first thing’s first. The Very Special Winner of last week’s Friday Face-Off is: Salute Your Shorts. By a landslide. Congratulations, Camp Anawanna!

First up, for this week’s matchup is Saved By The Bell: Mystery Weekend. As you know, all the kids from the cool clique in high school liked to spend their free time at bed & breakfasts solving mysteries with middle-aged retirees. So things start off with the teens chilling with a lot of creepy adults in a “haunted mansion.”

So basically someone is “poisoned” and it’s a game of musical chairs to figure out who the drink was originally meant for and who delivered it. Everyone thinks it’s the butler, but when the butler dies too then a cop shows up and also dies. And somehow this helps us figure out the mystery. 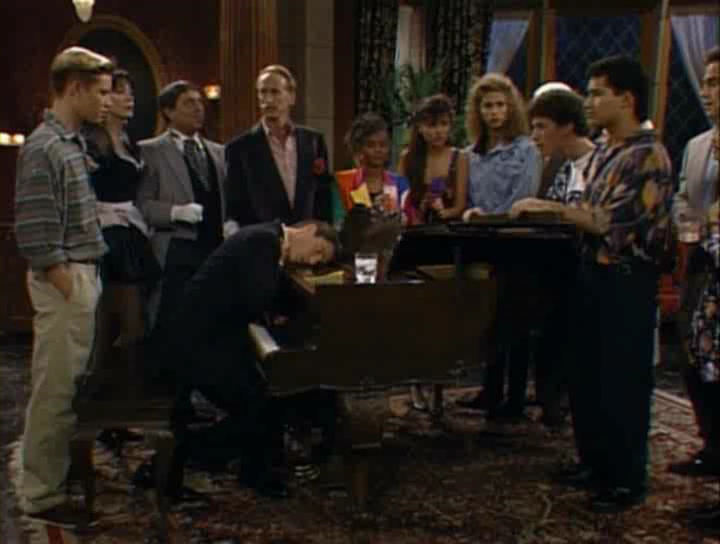 When the elderly lady guest’s necklace goes missing (off script) and the party host is almost killed by a falling ax, things get spooky. The host decides to end the game since now it’s a massive liability to have anyone there. He offers Zack some vouchers for another stay in the future, but he vanishes while Zack is in his office. Now Zack is the prime suspect! It turns out that the voucher envelope really contains the prize money, so everyone accuses Zack of being a murderer.

Meanwhile, Lisa, who was packing while Zack retrieved the vouchers, has disappeared from a locked room. This leads Zack, Screech, and Slater to discover a secret passage leading from the bedroom to the host’s office (sketch). This causes Zack to somehow figure out that Lisa was in on the whole thing, the game never stopped, and the host is actually dressed as a woman and the murderer/thief/it doesn’t entirely make sense to me.

The Golden Girls: The Case of the Libertine Bell
Immediately upon arriving at the Mystery Weekend opening dinner, Dorothy instructs the girls to start determining which guests are actors and which are actually guests. She already has a much better game plan than the SBTB kids.

Todd Susman plays the private detective who was supposed to protect an 88 year-old man from being shot. He failed and the 88 year old guy’s twenty-something wife is also “dead.” Todd Susman finds an exotic dagger near the woman’s body and a gun in the old man’s spinster daughter’s purse (you follow?). He then tells the group of guests that they should be able to solve the murders just from this information.

Dorothy solves it all lickety-split with a brief summation of the psychological and physical evidence. Then they can all just hang out hand have a great weekend, right? Wrong! Blanche’s man friend is murdered (for real!) in a locked room (with Blanche!). The police are about to cart Blanche off to jail when Dorothy rushes to her aide.

Basically, there’s a rival with Blanche named “Posey McGlenn” They’re both trying to sleep with their boss and get a promotion. Dorothy determines that Ms. McGlenn must have killed Blanche’s male friend because she was jealous (and new exactly where Blanche had left her dress whilst showering pre-romantic rendezvous). Then Posey almost shoots Dorothy, but the cops intervene in time. And surprise, surprise, the dead guy walks down the stairs because it was all part of the game.

Everyone but Blanche and the girls knew…well Rose knew too. She was pissed at Blanche for stealing her earrings, so helping Blanche’s coworkers think she was accused of murder felt like an even trade.