Every time I attempted to watch this show as a kid, I would say to myself, “Okay, I’m really old enough for this now. I can handle it,” and every time I would be totally terrified and feel that there was nowhere safe to escape the banal horrors of middle-class American life. This viewing was no exception. I shrieked at the opening credits just like when I was a kid. But I managed to make it through this entire episode, and I do not expect to have any nightmares. (I’ll have to let you know later about how that goes, but I’m managing fine as of right now.)

The Tale of the Twisted Claw is a modern-retelling of The Monkey’s Paw, and is set on mischief night and the following All Hallow’s Eve. Mischief Night–a prank night on the night before Halloween–is something that I am pretty sure I have only heard of happening in Michigan, but Are You Afraid of the Dark? was filmed in Canada, so I suppose maybe it’s a Northern US/Southern Canada tradition. Basically, these kids are TP’ing some trees and spraying silly string on cars. Which reminds me, how great was silly string? 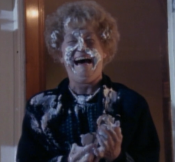 Anyway, two boys named Dougie and Kevin decide to visit a spooky house where Ms. Clove lives. Just for the record, I’m not sure if Kevin is actually the second boy’s name, but it sound right and so I will continue to use it. The boys ring Ms. Clove’s doorbell and Kevin sprays her in the face with a can of Barbasol. It’s a total dick move that causes her to stagger backwards and break a Ming vase. Then they run away because they are jerks. What they don’t see, however, is that Ms. Clove begins to laugh manically with her face covered in shaving cream, and we as the audience, realize that they are totally screwed.

On the following night, Kevin comes over to Dougie’s house, so that they can go trick-or-treating. There’s a ton of other kids there as well, but you only ever see them in the initial living room seen. They probably didn’t want to have to pay any other child actors, so they disappear immediately after this one group scene. But lucky for us, we are able to catch a glimpse o

f one classic 90’s costume–the human grape. You see, the human grape was a popular costume for children of the 90’s with lazy parents, who thought that the best option for a cheap Halloween costume was to stick a bunch of purple balloons on a green body suit and call it at day.

Believe it or not, one of my most vivid childhood memories happened with a human grape at my next door neighbor’s costume party. He was the only kid I knew at the party because for some reason none of our other neighborhood friends were in attendance. And of course he was busy being the cool party host, so I was left alone and friendless. Eventually, a shy little girl who had been hanging back from the party (probably because people wanted to pop her human grape balloons) approached me and said, “Oh Jasmine! I’m so glad you’re here!”

And I was like, “Cool but I’m not Jasmine.” And she said, “Oh haha Jasmine you are so funny!” And I was like “Yeah, but my name isn’t Jasmine.” She looked at me strangely and said, “Come on, Jasmine let’s go over here,” leading me over to the snack table. This girl was totally not listening to me. I explicitly said that I was not Jasmine. But I didn’t know anyone else at the party, so I gave up and decided to just be Jasmine for the party. I mean, she was a Disney princess, and this kid obviously seemed to like the real Jasmine enough to be friends with her, so I ended up feeling super cool and pretty too.

Suddenly, I was this bubbly entertainer and it was great…until my mom came to pick me up. My mom, bastion of truth that she is, took it upon herself to tell the human grape that I was not Jasmine. The human grape gave me this withering look like I had betrayed her by pretending to be someone else. I tried to invite her over to my house to play, but she refused to be my friend because I had mislead her…more like she would not listen to the truth and instead decided to believe that I was lying to her and also maybe she needed glasses.

Okay, okay enough talk of the trials and tribulations of my childhood. Let’s get back to the plot, Kevin suggests to Dougie that they return to Ms. Clove’s house to trick-or-treat. Dougie tries to convince Kevin that this is a ridiculous idea, but Kevin insists that she won’t recognize them because they are wearing costumes. However, he fails to note that only Dougie has a mask.

Ms. Clove seems totally pumped to have some trick-or-treaters and invites them inside for a “special treat.” It is like these kids have never ever heard of strange danger. They follow her inside, so that they can tell their friends how brave they are. Ms. Clove brings out a creepy claw in a music box that plays the Danse Macabre. She tells them not to be freaked out by the shriveled hand-thing in the box because it’s just a wooden representation of a vulture’s claw. She says it’s a g

ift for them and will grant them each three wishes. And they’re like cool a creepy claw from a total stranger, so they take it and leave. On the way home, Dougie–who is a major scaredy cat–decides that he has had way too much excitement for one night and wishes that they were done with trick-or-treating. Suddenly, out of nowhere a bike gang of big kids attacks them and steals their candy. The boys deduce that this happened because of Dougie’s wish and the magic claw.

The following day, Kevin decides to use the claw to wish that he could beat the cool kid in the 600 meter race at field day. The cool kid has the elusive 90’s mullet, rarely seen in the wild. It is calmer than the 80’s mullet and paved the way for the straight long hair that boy bands and teen stars of the late twentieth century would come to favor. Dougie, on the other hand, has a wannabe mullet, whereas Kevin is left with no mullet at all.

Out on the field, Dougie stands on the sideline of the race and notices an ominous tree. What the heck is up with this tree, you might wonder. This remains unclear as the camera repeatedly cuts back to the ominous tree and eventually it seems that the tree is growling.Personally, a growling tree is just about the most terrifying thing I have ever seen. But it turns out that it’s simply a stray dog behind the tree, who then runs toward the racers. The dog never even touches the cool kid. who is leading the pack of runners, but he scares him and the cool kid takes a dive just in time for Kevin to break tape. Unfortunately, the cool kid sustains a broken leg from his fall and the boys realize that the wishes always end up hurting someone.

Back at Dougie’s house, they try to figure out what to do with the creepy claw. It’s giving them what they want, but it’s hurting people. Dougie thinks that they should come clean to his parents and see if they can help them, but Kevin does not want to give up the power of the claw and wishes that Dou

gie would “lose his folks.” Seconds later, Dougie get a call from the police. He freaks out because now people are like literally being murdered by the claw. He decides that they should under no circumstances make anymore wishes. He refuses to even wish for his parents to be okay because something bad always happens and he worries that he will only make it worse. Unfortunately, he wishes that his grandfather were there to help them, but his grandpa is dead. They look outside to see his grandfather’s car pull up to the house. Kevin freaks out about seeing a dead guy and tries to wish him away. In a heated altercation on the Karastan rug runner right in front of the door, Dougie fights him for the claw because he believes that they must stop making wishes.

During the struggle, Dougie realizes they should apologize to the claw for breaking the Ming vase and wishes that it had never happened. The claw disappears in his hand, Kevin’s medal disappears from his pocket, and luckily the person ringing the doorbell is Dougie’s mom. Then she and Dougie’s dad decided to treat the boys to some ice cream. When the doorbell rings again, the boys open the door to find the Ming vase and a note from Ms. Clove that reads only “trick-or-treat.”

Halloween Lesson: Be careful what you wish for. No, but seriously.

2 thoughts on “Are You Afraid of the Dark?: The Tale of the Twisted Claw”