It is Thanksgiving morning and Danny’s mom is snowed in and can’t make it out of Tacoma. This leaves the Tanner’s without any Thanksgiving food, so the men decide to take the girls out to a restaurant. But DJ will have none of it.

She’s all like Thanksgiving should be spent at home! We always had Thanksgiving with mom at home! (Yep, this is one of those rare episodes where we admit the girls once had a mom and that she died tragically). Also, Joey walks around randomly saying the “Miracle of Thanksgiving” and making a trumpet noise. Was he also the voice of Face on Nick, Jr.?

DJ says that she can handle the meal because her grandma was going to put her in charge of the turkey, so she can handle the whole thing. Plus, last year her mom taught her how to make a “picture perfect pumpkin pie.” So in honor of the late Pam Tanner, the family decides to stay home and let the ten year-old cook.

The first season of this show is just so great. I still cannot understand why Joey is a necessary addition to this family, but at least when the girls were younger it made sense that they needed an extra hand (maybe). Anyway, this episode is super cute because everyone is adorable and dancing around the kitchen while setting the table.

Everything is really shaping up into an excellent Thanksgiving. Only, DJ did not remember to defrost the turkey and so they somehow end up with a frozen yet browned bird. This is amidst a large pre-dinner speech in which DJ asks Danny if her mom would be proud of her for making dinner. And how she wasn’t sure she could do it, but things really turned out great.

So how can they possible tell this little girl who is trying to impress her dead mom that the turkey she made sucks? Well, they don’t exactly…they shove the turkey back into the oven, crank it up as high as it will go, and try to purchase a turkey off of a couple of lost travelers who ask if they can use the phone. None of it pans out though, and the non-defrosted turkey catches on fire. Then Stephanie drops the “picture perfect pumpkin pie” and everything is ruined.

Danny takes DJ aside and tells her that her mom would have been proud of her for bringing everyone together to make the Thanksgiving meal because Pam knew that the important thing about Thanksgiving is family. But the really heart-wrenching stuff (and yes, I’m already tearing up by this point) happens when 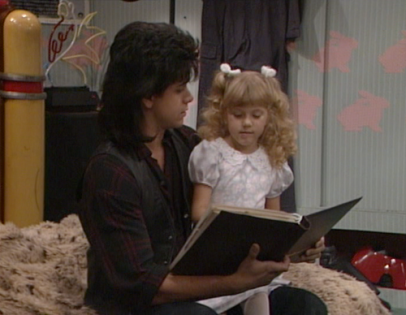 Jesse goes to talk to Stephanie (who is hiding in her closet because she dropped the “picture perfect pumpkin pie). At first things start off with the run-of-the-mill “everyone makes mistakes” lesson, but Stephanie is very adamant that not everyone makes “pie mistakes.” So Jesse decides to tell her a story about when he was a kid and did something very stupid to show that sometimes kids do stupid things and it is okay. He takes her to his room to show her a childhood photo album, specifically a haircut that he allowed her then ten year-old mother to give him when he was five. Stephanie feels better after hearing the story and enjoys seeing childhood pictures of her mother, but Jesse ends up being very upset by the whole interaction.

I guess it is easy to forget as the series goes on that Jesse is Pam’s kid brother and spends a lot of the first season being arguably more affected by her death than anyone else. I guess it’s less depressing on a sitcom to show the grieving brother rather than the grieving children or spouse, but nevertheless his performance is very effective. Danny and Jesse realize that they will never get over losing Pam, and that some bad feelings just stay with you. But Danny tells Jesse that it’s important for him to keep sharing his memories with their family because that is what will keep her a part of their lives and is probably the only thing that will ever make him feel better.

Very Special Activity: Share all of your great (and not so great) stories with your families this season. And if they’re driving you nuts, then you can post them here!