Agh where do I even start? This is the 3rd episode of this show that I have ever watched While it was way better than the other two, it once again demonstrated that it totally fails at having organic heartfelt moments. It seems like Girl Meets World is all about WE ARE HAVING A BIG HEARTFELT MOMENT RIGHT NOW whereas Boy Meets World was just awesome and that is frankly all that I can say about this in terms of a critical in-depth analysis. This show is just so obviously forced and superficial that there is nothing else to say about it.

Except that Rider Strong has made a guest appearance and we need to talk about that. It’s Christmas Eve and Amy, Alan, and their son Josh are visiting, but Corey is most excited about Shawn coming over. Josh is the ridiculous fourth child that Amy and Alan produced in what was (I think) the last season of the original show. The writers clearly had nothing else to do with their characters, so they used a plot tool…ugh. But they did cast a cute actor to portray older Josh and his entire job is just to be “cool.” That makes sense to me continuity wise because two older parents raising a fourth surprise baby are probably pretty chill.

But something that does feel like a bit of a failure to me is that Amy is a total jerk to Topanga form the get-go of this episode. I know that Boy Meets World has committed some egregious character continuity errors over the years, but Amy was always like the best boyfriend’s mom/mother-in-law I could possibly imagine. Even when Topanaga stayed with them in high school and virtually destroyed all of their Christmas traditions, Amy was incredibly cool about it. But in the present day, all she can do it criticize Topanga’s cooking. Like come on people, why can’t we see Amy being cool Grandma with the kids? Why does she have to be a jerk? (Eventually, we learn that Amy is being awful because she misses having Christmas in Philly and feels useless or something like that but whatever.)

So I’ve hated the “girl Shawn character” from the first moment she showed up. But now I extra-super-mega-hate her because she’s so clearly a plot device and also because she is obnoxious. Shawn shows up and like doesn’t know how to talk to children. He talks to Josh who is like only four years older than Corey’s daughter, but apparently those four years are the difference between Shawn being able to form a sentence and well…being rude I guess. But like Shawn isn’t actually rude. You know what he is? He’s your dad’s friend who comes over for dinner and is clearly into hanging out with your dad. And that is totally okay because he is your dad’s friend. Like what thirteen year old girl is offended that a thirty-five year old man won’t hang out with her? That’s messed up.

But anyway obnoxious friend gets all plot device-y and accuses Shawn of hurting Riley (the daughter) with his lack of interaction. Then they dramatically leave the room all very special moment like and Shawn is left sitting on a window seat with Cory, thinking about his actions. Then in another scene they wake Shawn up from a nap (rude) and demand to know why he doesn’t like Riley. He’s all like what is wrong with you weird kids? I like Riley just fine. And then Riley demands that he tell her when her birthday is and what her favorite color is as if he is some bad middle school boyfriend. Like when would you ever talk to your dad’s friend like this? And what kind of parent would allow this level of disrespect? But like Cory is all calm and don’t worry Riley, Shawn knows your b-day. And then Riley gets all like offended and doesn’t believe him, so Shawn takes her and the obnoxious friend to a bakery where he tells them about Riley’s birthday. (December 8th. Tomorrow. I won’t be celebrating.) Riley’s birthday was also the day that Shawn left NYC for good. 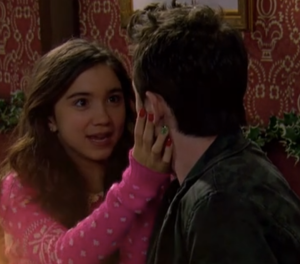 Then Riley and her obnoxious friend proceed to armchair analyze Shawn in front of his face, and then Riley forces him to look at her. (Ugh this girl would be like the worst girl to date in middle school because look at how she behaves with grown men! Can you imagine if you forgot to cover her locker with wrapping paper for her birthday?) Then she says, “Every time you see me, does it remind you of what you don’t have?” SO OUT OF LINE, MAN! I imagine this is supposed to be some “from the mouth of babes” shit but like no way dude. This is so inappropriate.

After this ridiculousness, they go back home where Riley proceeds to force a bunch of heart to heart chats first between her father and Shawn and then between her obnoxious friend and Shawn (since they’re the same person or whatever). No actual kid has this much authority. And kids that do have an inappropriate amount of authority end up being drug addicts or assholes.

Very Special Lesson: Do not ever watch this show. Except for when WIll Friedle makes his guest appearance. We should all watch the Will Friedle episode.