Topanga spends Christmas with the Matthews and is basically the worst houseguest ever. I know she’s known Cory since like birth, but doesn’t she even want to try a little bit to not totally piss off his parents? Isn’t she like looking to one day marry this guy? She brazenly changes out all of their Christmas traditions with her own. She makes them drive six hundred miles to Vermont to get an evergreen instead of the aluminum tree that they have used for the past twenty years. She scorns their eggnog and sends them on a mission to get hot mulled cider. She even brings her own tree topper, a snowy white angel, instead of their cardboard macaroni noodle star. 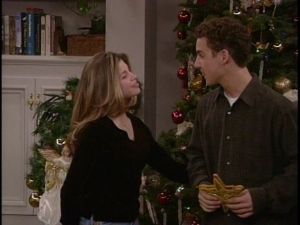 Meanwhile, Shawn and long lost brother Jack are trying to figure out what they have in common. They accidentally discover that they both like iceskating and everything is just fine. They leave Cory sitting on their couch alone, and he falls asleep to dram A Christmas Carol-style. He has left Topanga on Christmas Eve (which is a douche move even though she was being insufferable). She says she will be waiting for him at his parents’ house, but Cory remains at Shawn’s nevertheless.

Here’s what happens in Cory’s dream: 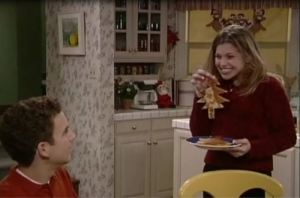 Cory wakes up from his dream and delivers the promise ring to Topanga. OMG she also gives him a promise ring for Christmas! I feel like in real life Cory’s parents would have been like don’t come to our home and ruin our traditions way before things ever got to this point.

Very Special Christmas Lesson: When you love someone, you start to make your own traditions. And sometimes that means having an aluminum tree.

One thought on “Boy Meets World: A Very Topanga Christmas”