Sabrina wakes up on the morning of her wedding with cold feet. They’re frozen in blocks of ice. She admits that maybe she’s a little anxious because most of her family can’t be at her wedding and she kind of wishes that Harvey could be there (but he can’t because it’s too weird). Things are clearly not fine even though she promises that they are. 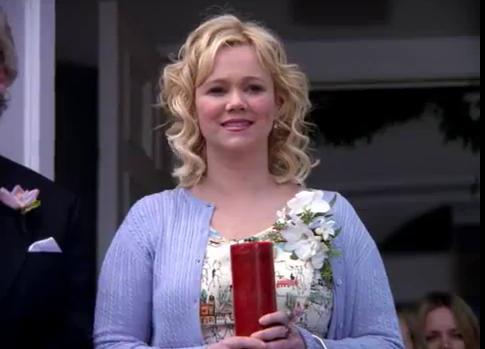 But her cousin Amanda (played by Melissa Joan Hart’s real life sister) is there and soon her Aunt Hilda arrives too. Aunt Hilda brings Sabrina’s mom disguised as a lama as a wedding present. She’s recently been liberated from the ball of wax due to some unexpected leniency from the witch’s counsel. Then Aunt Hilda presents Sabrina with a candle. Her Aunt Zelda has agreed to be wax in place of Sabrina’s mom for the duration of the wedding.

Sabrina returns to her room to get ready with renewed confidence. But she finds doubt sitting on her bed. Sorry, that’s Doubt with a capital D. He’s a person and he’s brought her fiancee Aaron’s soul star. He believes Sabrina is doubting that she and Aaron are soul-mates and he hoping this will help. But they only way to tell if they’re soul-mates or not is to see if their stars fit together. Doubt didn’t bring Sabrina’s star to her (jerk) so she has to go to the North Star to get it. 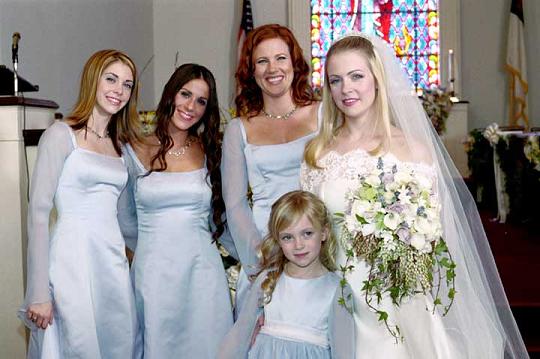 The soul stars almost fit together, but not completely. And try as she might, Sabrina can’t get them to fit. So she and Aaron have a talk, and he tells her he doesn’t really think life guarantees soul-mates but that they love each other and will try to make each other happy. This convinces Sabrina to go ahead with the wedding.

Just as she is about to walk down the aisle, she realizes she is still wearing a bracelet that Harvey gave her seven years prior with the exact time they met engraved in the band. How could you not remember you were wearing your ex’s gift throughout the entire duration of your engagement, Sabrina?? 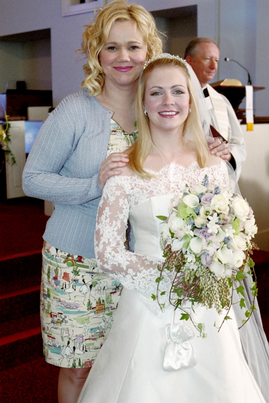 Sabrina shows up on her Aunt Hilda’s program and asks to speak to her and Mother Spellman STAT. They try to walk down the aisle as discretely as possible, but Sabrina’s stupid friends leave the alter to join the chat too. This is such a nightmare. Sabrina starts bemoaning the fact that the universe has been against this relationship from the start, and her mom and aunt tell her that she’s the only one dooming it to fail. They tell her to listen to what she really wants.

Sabrina decides once again that she will marry Aaron. Only, she can’t make it through her vows. So she breaks up with Aaron at the alter while her friends hide them behind her veil. As Sabrina leaves the church, she sees Harvey sitting on his bike with his soul star (retrieved by Amanda from the North Star). She runs up to him and they start making out, apparently not concerned by the fact that the man she jilted moments ago is just inside the door with all of his friends and family.

Luckily, it’s only Sabrina’s family and friends who end up standing on the church steps to see Harvey and Sabrina fit their soul stones together and ride off into the sunset (err, midday sun…) right at 12:36 exactly.

Very Special Lesson: If you wake up in the morning with cold feet. Stop there. Don’t ruin the day for everyone.