This is Mr. Turner’s FINAL episode of Boy Meets World, so just keep that in mind. He starts of the episode by lecturing Shawn on how he should have some goals in life now that he is a junior in high school. Topanga is all like I have goals! I want to go to Penn State! Wft, Topanga. You’re the freaking valedictorian. Is John Adams High such a shitty school that the valedictorian is aiming for Penn State instead of UPenn? Well, this would explain why Shawn has never been held back in any grades even though he’s a completely terrible student. 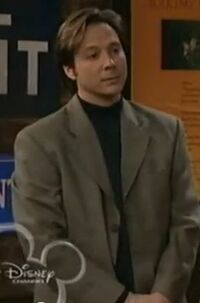 Shawn is currently back home with mom and dad, but Mr. Turner is still doing some parenting (clearly). A cute girl, Sherri, overhears their conversation and convinces him to come along with her to a cult-meeting. You know, for love and acceptance. She introduces him to cult-lead, Mr. Mac, who dresses like James Spader in Pretty in Pink.

Shawn correctly identifies “The Centre” (where a bunch of teenagers live with Mr. Mac) as a cult, which I think it pretty abnormal because aren’t cults supposed to trick you in to think they’re not cults? I don’t know, I barely got through the second season of The Following, so I’m not sure I’m well versed on this.

Shawn’s anti-cult convictions must not be very strong because all they have to say is “we won’t judge you” and he’s drunk the proverbial Kool-Aid within an hour. (This is Boy Meets World so I’m sure there won’t be any actual Kool-Aid. Or Flavor-Aid, as it were. I feel obligated to point out that we’ve been blaming the wrong brand name for the last 40 years.) He goes with the kids from The Centre to Chubbies and yells at Corey for questioning his “beliefs.”

Some might call this an “implausible” situation. Clearly, Sherri has been walking around John Adams high school blabbing about how she’s in a cult and living with a non-guardian and yet no one has called police of child protective services. But I would like to argue, that Boy Meets World has invented the most terrifying cult leader ever. He’s so powerful that he doesn’t even have to resort to the usual tactics and can brainwash someone in literally minutes.

Eric and Corey go to investigate The Centre. Shawn tells them to get out because they don’t belong. But Eric wants to live there because he met a pretty girl. (This is Eric’s pretty-girl stupid phase, which directly preceded his stupid-stupid phase.) But once they’re actual there checking it out, it’s kind of like just creepy but not actual a cult. I mean it’s more like Shawn has joined a really lame clique. These people apparently come and go as they please, get plenty sleep, are not forced into manual labor or sexually coercive acts, and there appears to be no weird death-pact. So as much as it would also pain me to see my friend join a church with a really weird youth-group, this does not appear to be a literal cult.

Well, then they induct Shawn as a life-member, which is admittedly odd. Corey goes home and enlists the help of his dad and Mr. Feeny, who has been trying to close The Centre for years. However, Shawn shows up in the Matthews/Feeny yard before they can go to The Centre to get him. He’s there to bring Eric home because Mr. Mac knew Eric was only interested in the hot girls.

Mr. Feeny leaves the yard to take a phone call and Amy asks Shawn why he needs to believe in The Centre. They determine that Shawn didn’t know what he believed in before The Centre, and Mr. Feeny returns to report that MR. TURNER HAS BEEN IN A MOTORCYCLE ACCIDENT! Everyone rushes down to the hospital, where apparently on the The Matthews, Topanga, and Mr. Feeny care about Mr. Turner. Shawn shows up with Mr. Mac. Given the fact that Mr. Turner apparently has no family, I think Shawn should feel even better about the closeness of their relationship. But oh well, he’s into Mr. Mac now.

Alan threatens to kill Mr. Mac if he messes with Shawn. Yep, family television used to use murder as leverage in arguments. They don’t write them like they used to, folks. With of all their arguing, they don’t notice that Topanga, Shawn, and Corey have left the room. Shawn freaks out and says it’s too intense and he needs Mr. Mac to deal with this tragedy. Topanga (back when they let her drive plots) tells him that this is real and he has to deal with it, and Mr. Mac can’t help him. Then Corey grabs him and explains what a hug is. Then Shawn is left alone with Mr. Turner, as he begs him to wake up from his coma. He tells him that he knows he’s in there even if he can’t talk. This leads Shawn to beg God to let Mr. Turner be okay, realizing that He can hear him even if He doesn’t talk. (This show was very quietly Christian, I’m realizing. I mean like they never went to church but this is like not a show with buddhist undertones.) Then Shawn holds Mr. Turner’s hand and Mr. Turner (who doesn’t wake up) gently grasps his hand in return. AND THEN WE NEVER SEE HIM AGAIN FOR THE REST OF THE SHOW!

Very Special Lesson: Always have a back up career. No job is guaranteed. You can literally be the very special lesson in a show. You can literally guide a main character out of a terrible cult, and yet the writers will still discontinue your character by leaving you indefinitely in a coma.