This episode occurs during Uncle Jesse’s short, swept back hair phase. This is my favorite of his hairstyles. Anyway, Steph is stressing because she’s been in the sixth-grade at  new school for two weeks and hasn’t made any friends yet. But luckily, she befriends a cool older girl in the bathroom one day when she can’t figure out how to work the hand-dryer.

Meanwhile, in the most very special of radio shows, Joey and Jesse have decided to start a new segment dedicated to solving adolescent problems. They argue on the air over whether to call it “Teen Talk” (Joey) or “Yaking with Youth” (Jesse). They’re going to let DJ, Steve, and Kimmy answer questions from other kids, so I’m not even really sure why Jesse and Joey are around. They even leave the room to argue about the stupid name, leaving the kids to run the show.

Michelle (I feel like I probably neglect her on this blog) is having her own issues. Danny has promised her classmate’s mom that he can hang out at their house while she finds a new sitter. All he can do is complain that their fridge is devoid of ho-hos, nutty buddies, and ding-dongs. Who even puts ding-dongs in the fridge? What a weird kid. This is really just a pointless attempt to give Mary-Kate and/or Ashley some screen time, while we wait for Stephanie to come how with her new friend. 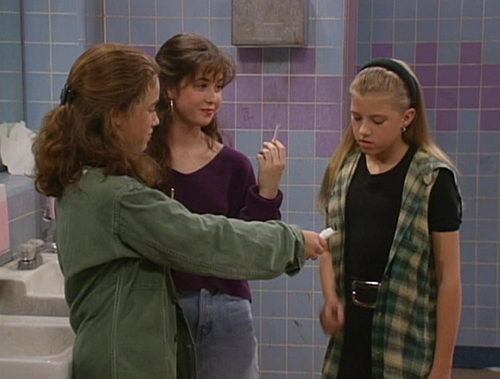 This friend, called Micki, is “edgy.” She tells Danny that she writes her own notes to get out of gym class and takes turns making dinner for herself and Janet (her mother, whom she calls Janet not mom). The next day at school, infamously cool girl Gia and her pals join Stephanie and Micki during their bathroom hangout. And everyone starts smoking except Stephanie. She tells everyone she’s trying to quit, but they all see right through her facade. Gia starts mocking her pretty heavily, but Micki tells her she’s okay. So Gia tells her to go hang out with Stephanie instead of them and Micki doesn’t.

I feel like everyone is always like OMG THIS IS THE EPISODE ABOUT HOW IT’S BAD TO SMOKE! But I feel like this is really the episode about how people suck. I’ve totally been in Stephanie’s shoes. I’m sure we all have. You’re just so lonely that you’ll hang out with pretty much whomever for the sake of human connection, and then sometimes those people turn out to make you feel like crap. Luckily, Stephanie has a large family to turn to. She tries to play a card game with Michelle, but that doesn’t last long. Then she tries to color with Nicky and Alex. When she notices how the white crayon kind of resembles a cigarette she starts pretending to smoke and tells the little kids how cool it is. Great role-modeling, Steph.

Thankfully, Jesse and Joey have just started that new advice segment on their radio show! Stephanie calls in and pretends to be a girl called “Olga.” Olga has just moved to this country and her only friend wants her to smoke. They tell her that smoking isn’t cool and this girl isn’t really friend. And then they hang up on her to play a song by The Beach Boys.

Danny overhears this whole situation, and he tells Stephanie that he is proud of her. And he says that if she thinks that Micki is a good person, then she should still be her friend. The next day in the bathroom, Gia starts to harass Stephanie again but Steph puts her in her place with snark and quick comebacks. Micki laughs along with her and decides to hang out with her. Then everyone calls her a scrub, but it’s okay because Micki asks her to hang out after school

Very Special Lesson: Having a smart mouth makes you cool, not smoking.