Sabrina’s aunts are like ridiculously into Christmas. They’re wearing some pretty intense Christmas garb and acting even more peculiar than normal. But Sabrina’s cranky about Christmas. She gets frustrated with the lights and would rather use magic than deal with decorating by hand.

Sabrina’s aunts decide to engage her in a myriad of Christmas activities in an effort to make Sabrina more festive. But with each thing they try, she only gets less and less spirited. So finally they let her go to a party at the coolest club in the other realm on Christmas Eve. She’s such a grouch they decide to just spend Christmas Eve dinner without her. 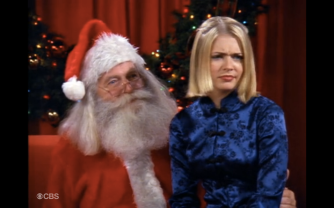 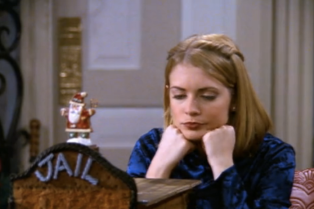 But it turns out the other realm party is really creepy and awful. The only reason Sabrina was invited is that she is anti-Christmas spirit. The people at the party are throwing darts at a board with Santa’s face on it and watching a TV showing people celebrating Christmas.

That’s when things get really creepy. They zero in on Sabrina’s aunts eating without her and decide to make it even “more pathetic” by tricking them into thinking Sabrina came home for dinner, but then she of course doesn’t show. Like how creepy is that if witches can just watch each other? Like do they watch each other in the shower? Ick.

Sabrina is so disgusted that she rushes home to celebrate with her aunts. But when she gets there, she finds that she has erased Christmas entirely. (She turned off the TV and accidentally hit “erase” prior to leaving the other realm party.) Side note: Salem once destroyed the holiday “Bobunk” in much the same manner. What’s Bobunk? Exactly. 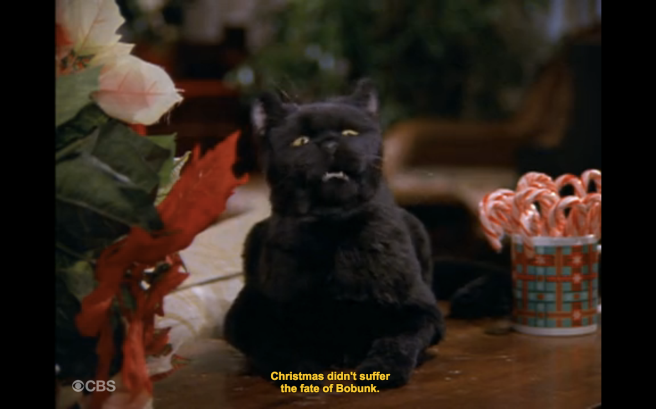 Sabrina tries to save Christmas by spreading Christmas cheer to everyone. And it turns out that Christmas is actually pretty creepy if you don’t know the traditions.

For example, Sabrina gets arrested when she dresses up as Santa and yes all a random child in a department store when she doesn’t sit on her lap. She also sounds like a nut because she keeps walking around singing Christmas carols but like they just sound like jibberish to everyone else…

But when she and her aunts get snowed in, Sabrina realizes “all the hoopla of Christmas isn’t as important as spending time with your family.” Whoops, the spell is reversed! 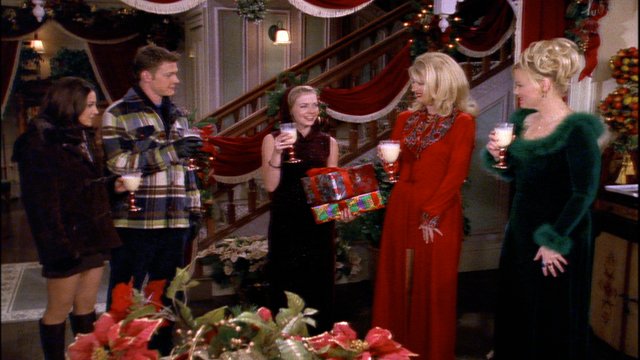 Very Special Lesson: Actually, I’m not sure what they were going for her. Sabrina didn’t like “the hoopla of Christmas” so it’s not like she was overly materialistic and needed to learn the “true” meaning of Christmas. She already spends a ton of time with her aunts and obviously never wanted them to suffer…oh wait yeah I guess she wasn’t supposed to skip Christmas Eve Dinner. So yeah. Have dinner with your loved ones and skip the crappy party instead.