Freddie “Boom Boom” Washington (Lawrence Hilton-Jacobs) is having a bad day. He appears to be going through opiate withdrawal. But he tells the rest of the “sweat hogs” that he’s just groggy because he’s taking some pills that the doctor gave him for a knee injury.

Then his friends find him in the bathroom taking pills out of his shoe. (They’re in a manila envelope, fyi. He’s not taking dirty-foot pills.) He claims they are vitamins that the doctor gave him to help with “grogginess.” Well, I think we all know what kind of vitamins these are.

Freddie is obviously high in class, so Mr. Kotter (Gabe Kaplan) decides to confront him about it. And let me just say, Gabe Kaplan is like the worst actor to attempt a dramatic scene. Lawrence Hilton-Jacobs is dancing in circles around Gabe Kaplan’s skills and they are so incredibly mis-matched that the whole scene is weirdly flat. He’s obviously incapable at helping Freddie, so the sweat hogs decide to take matters into their own hands. 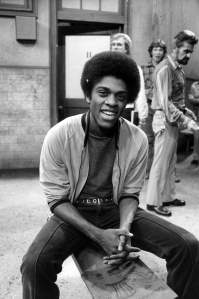 Their master plan is to pretend like they are all also on drugs. Interesting approach. For a bunch of inner city kids, they sure seem like they’ve never seen anyone on drugs before. Their bizarro drug imitation works on Freddie for about 5 seconds until he realizes that they’re just being weird. So when that didn’t work, Arnold decides to do some like weird acrobatics. He plans to jump from Mr. Kotter’s classroom window to the window across the courtyard.

And that’s when they realize that Arnold isn’t pretending to be on drugs. OH MY GOD YOU GUYS ARNOLD THOUGHT THAT FREDDIE WAS ACTUALLY TAKING VITAMINS. THIS IS THE EXACT PLOT OF FRESH PRINCE OF BEL AIR: JUST SAY YO.

Very Special Lesson: You guys, Fresh Prince totally ripped this off. Like is this plagiarism? Does the world already know about this?

7 thoughts on “Welcome Back, Kotter: What Goes Up”