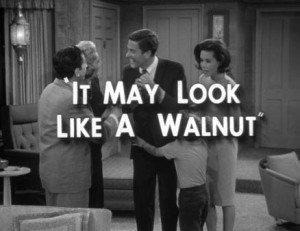 We open the episode with Rob (Dick Van Dyke) and his wife/roommate, Laura (Mary Tyler Moore), having a chaste night in their twin beds as Rob watches a scary movie about an alien named Kolak from the planet Twilo while Laura hides under the covers. It’s some weird movie where if you get a creepy walnut and open it, you’ll start to look like Danny Thomas, lose your imagination and your thumbs, and maybe end up with an extra pair of eyes in the back of your head…I’m not clear on that last part. Without thumbs and imagination, we can’t build the amazing stuff we have on earth. Ohhh profound. Or wait, is it? I’m not sure if it’s really profound or if I watch a ton of crap TV and this is just good writing. Rob proceeds to make creepy noises and keep Laura awake because that’s what you do to your wife when you’re in a summer-camp living situation.

The next morning Rob wakes up to find walnuts scattered allover the living room carpet. He finds Laura in the kitchen and says he got her message loud and clear. He apologizes for teasing her and gives her back one of the walnuts from the living room. But she doesn’t know what he’s talking about and insists she’d never put walnuts all over the floor. She sends Richie (their son) off to school with a bag of walnuts for lunch and offers to make Rob two eggs (aka walnuts) for breakfast. Rob thinks she’s laying it on a bit thick, so he heads to the office sans breakfast. As he heads out, she pops a walnut in his coat pocket, just in case he gets hungry.

At the office, he tries to tell his coworkers, Buddy and Sally, about his weird morning. But they seem to think that this Kolak guy is real. They both remember a time when he was thrown out of the UN. And Sally knows about his extra pair of eyes even though she has never seen the movie. She says she was at the UN the day that Kolak was thrown out. But Rob really starts to get paranoid when Buddy starts to eat walnuts. He demand to know why Buddy got the idea to eat walnuts and even suggest that Laura must have called him and told him to eat the walnuts that morning.

Rob decides to crack open that walnut from his coat pocket. Why, Rob, why? It’s one of the creepy walnuts, but he’s decided he MUST be dreaming. He calls Laura and asks her to check the bed and see if he’s asleep in it. She asks him if he still has his thumbs and then laughs ominously. Then Danny Thomas shows up. Just kidding, it’s Kolak! He tosses some walnuts at Rob and uses the eyes in the back of his head to tell him he has a stain on his tie. But other than that, he doesn’t do much else.

But Rob still has his thumbs so all is well. Only he tries to light a cigarette and discovers he doesn’t have any thumbs. So he decides the only thing to do is go home and go to bed before he wakes up. He heads home and cannot find Laura. He tries to put his hat away in the coat closet and finds it to be filled with walnuts. Laura comes flowing out of the coat closet in the sea of walnuts. She’s from the planet Twilo and she wants to turn Rob from human into a Twiloite. Buddy and Sally join her in surrounding Rob, but then the alarm rings and Rob finds himself back in his bedroom with Laura, who has also been having nightmares.

Since they can’t sleep, they decide to do what any married couple would: leg exercises in their individual beds.

Very Special Halloween Lesson: I have to be honest, I found this episode genuinely disconcerting and will avoid shelling any walnuts for the foreseeable future.

2021 Update: Hi WandaVision fans! Click here to see why ScreenRant says “It May Look Like A Walnut” is super important to the show.

3 thoughts on “The Dick Van Dyke Show: It May Look Like a Walnut”