OH MY GOSH YOU GUYS. I am reblogging this post because 4 years ago I was very dumb and did NOT realize that Kristy Swanson plays a very important guest role in this episode. She’s the one in the blue sweater who asks Mike if he wants to do drugs!! I bet you’re wondering how I realized this now? As it turns, I keep falling down the Tonya Harding/Dancing With the Stars rabbit hole and I just happened to be reading a v. long thread in which Kristy Swanson asked people to #TakeAKneeForNancy by not watching the show. This lead to a lot of MAGA people who don’t like Colin Kaepernick’s protests during the national anthem dragging Kristy for supporting “taking a knee.” These people are idiots for the following significant reasons:
1. They don’t realize that every citizen’s right to exercise the first amendment right to free speech in the form of public protest IS what makes America great.
2. They don’t realize that Nancy Kerrigan’s KNEE was injured in a vicious attack.
3. They claim to be sports fans but don’t realize that is is customary for ALL players to “take a knee” when one player is injured on the field.
-END RANT-
HAPPY FRIDAY EVE! 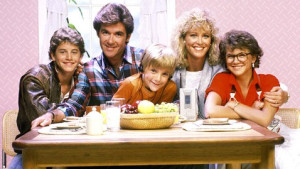 If you’re a close reader, you may have already deduced that this episode takes place on a Friday. Everyone except for Mike is at home watching TV. Carol is at home because her boyfriend is grounded and apparently she has no other friends Ben is home because he is nine years old, and Jason and Maggie are tired form the workweek.

So from here on out we’re basically only paying attention to Mike. While innocently hanging out a local pizza parlor, Mike and hi s friends get invited to a college party. Thankfully, this party is a lot realistically depicted than the frat party on Full House. The guys get to the party and suddenly they are on the set of Miami Vice. Everyone is rich and everyone is doing coke in the bathroom. But like everyone is doing coke, so I am confused as to why they…