This is some stiff competition, you guys. The final semi-final round is upon us. This is the penultimate post before we find out once and for all which of our six sitcoms took the best vacation to Hawaii! As you may recall, all of the Brady’s got to go to Hawaii on business with Mr. Brady. They almost died because of a “tabu” amulet, but luckily they managed to return the amulet to a creepy cave, thus avoiding total destruction, and ended up having a lovely family vacation.

But over at Boy Meets World, Corey and To 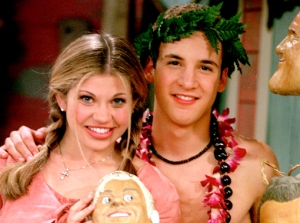 panga are finally on their honeymoon! Eric messes up their wedding night by sending Corey and Topanga to a honeymoon suite pretending to be another couple. The best-man/wacky-brother decides to make it up to them by lightly stalking them on their honeymoon in order to make sure everything goes perfectly. Corey and Topanga have such a good time on their honeymoon that Corey pressures Topanga into not returning to Philadelphia and instead spending the rest of their lives at the Hawaiian resort. Corey manages to make enough money painting celebrity heads onto coconuts, which all of the tourists love. They actually end up being pretty rich and very popular. The island is really weird to be honest. Everyone relocated from Ohio and managed to remain pasty white. They also use soup as deodorant?

Eventually, Corey and Topanga realize how much they miss their family. Mostly, because Corey paints a couple of coconuts to look like Shawn and Mr. Feeney and has absolutely no memory of doing so. (As it turns out, Eric actually painted them and then was held captive by the Ohioan-Hawaiian clan.)

I think these two episodes will be hard to compare, but here we go! The Brady Bunch clearly wins on integration of Hawaiian setting. I’m pretty sure everything except for 4 seconds of stock footage was filmed on a soundstage in Boy Meets World. They also win on overall vacation attire as well, in part because the late-90’s prep fashion can never compare to late-mod meets suburban-hippie garb. Even though I love the “adorkable” Brady’s, the writing on Boy Meets World is (unsurprisingly) much tighter and manages to be genuinely heartfelt even when it is ridiculous, so they win on overall plot. The Brady Bunch soundtrack is solid and even features Don Ho singing to little Bobby and Cindy, which of course the canned elevator music of Boy Meets World‘s Hawaii just cannot match. 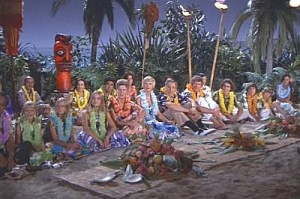 The as yet undefeated Bradys advance to the final round. Will they have the best Hawaiian Vacation ever?? 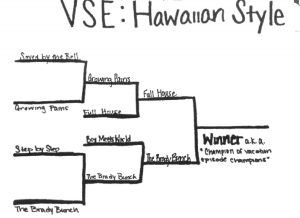 4 thoughts on “Boy Meets World vs. The Brady Bunch”