Wish Upon a Star is kind of like Freaky Friday but with sisters and edgier. It stars a young Katherine Heigl from the days before she supposedly alienated everyone in Hollywood with her alleged attitude problem. (That was so hypothetical that I hope Ms. Heigl can’t be mad at me. Since, you know she probably reads this right?) It contains a theme song that sounds like a bizarro rip off of the Boy Meets World theme. And parents whose primary role in this film is to do absolutely nothing. And unlike the typical body-switching movies, which teach us to appreciate our parents, this one teaches us not to be assholes to our siblings. In short, it is awesome.


Danielle Harris and Katherine Heigl play polar opposite sisters, Haley and Alexia Wheaton. Haley is a mousey science nerd and Alexia is a hot bimbo. They really cannot stand each other. This is mostly because Alexia is a snob and thinks Haley is lame while Haley hates that Alexia makes her late to school. So clearly, one of the sisters is more of a jerk than the other. Hayley also wants to date Alexia’s boyfriend. One night, each girl wishes upon the same shooting star that she could be the other sister. (Oh wait, sorry that’s a spoiler. So for most of the move we only know that Haley wished and not that Alexia did too…)

Anyway, they wake up the morning after the shooting-star-incident in the wrong body. Haley (in Alexia/Katherine Heigl’s body) is super pumped because now she gets to be popular and date her crush. Alexia is really frantic because she has a fragile soul and cannot stand life without the protection of her 1995 version of the Plastics from Mean Girls. They try a ton of other wishing methods (b-day cake candles, wishbone, pennies in the toilet a.k.a. “wishing well”) but discover that only the star method is effective. Thus, they have no choice but to live as each other over the course of a day.

The girls in this movie have even worse rules than the plastics. According to one of the clique members, they signed these rules in blood. Here’s a list I have curated from my viewing of this film:

Haley learns from Alexia’s friends that Alexia broke up with her boyfriend (a.k.a. Hayley’s crush), so she tries to get him back. It’s very creepy if you think about the fact that she is an entirely different person and she’s trying to make out with this dude. Meanwhile, Alexia binge eats since she is no longer counting calories in her own body. When Aleixa discovers a hickey on the neck of her usual body, she flips out and forces Hayley outside to wish upon another star. They find no stars as it is overcast and decide to spend the next day ruining each others lives.

It turns out that Alexia was freaking out mostly because she thought that Hayley was going to lose her virginity (her meaning…well both of them) in Alexia’s body when Alexia was stuck in Hayley’s body, which I guess is pretty stressful when you come to think of it. But she relaxes a bit when Hayley tells her all she did was kiss a lot. Hayley is upset that Alexia thought that she would have sex in her body and Alexia is upset that Hayley assumed she was having sex. They realize that they never really knew each other and decide to start helping each other out. Hayley will help Alexia look smart and Alexia will help Hayley find a boyfriend. Also, Alexia tells Hayley it isn’t right for her to be making out with her boyfriend because it’s not fair to him, so she tells her that it’s only okay to hold his hand and nothing more. But it is too little too late because Alexia’s boyfriend tells Haley (who he thinks is Alexia) that he loves her and then she gets weird and runs away because well it is a weird situation. 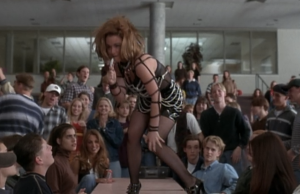 or, who had a crush on Haley from the beginning, starts to feel like his personality is more compatible with Alexia (who is actually Hayley!). That night, Haley wishes on a star to become herself again, but the next morning she wakes up and she is still Alexia. She thinks that they will be trapped forever as each other, but the real reason that they did not switch back is that Alexia also made the wish. But you already know that because I told you that in second paragraph. Anyway, they tearfully admit to one another finally about how they hated themselves and wanted to be one another. They hurry outside to find a shooting star, which of course they do because this town is FULL of shooting stars. They switch back and are all the better for having not been themselves for a while.

Very Special Lesson: It’s okay to date your sister’s boyfriend as long as you love her more in the end.

3 thoughts on “Very Special Movie: Wish Upon a Star”