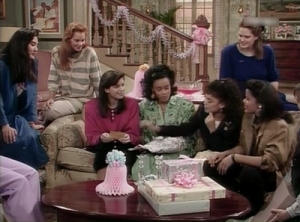 The Cosby’s are busy preparing for a wedding shower that Denise is throwing for her friend Veronica. Theo is super bummed because he spent all day decorating the house only to find out that the party is strictly women-only. There’s some talk about gender roles (Bud wants Rudy to get him juice because she’s a female and she’s all no way, Bud.) Then Theo and Cliff spend forever hanging shelves because Clair wants to keep them away from the party. Theo tries to read instructions in French. Denise is like yay hanging out with the bride to be! BORING!

Where’s the very special part? Let me skip ahead. We find out seventeen minutes into the show that Veronica is only getting married because she is pregnant. This must be one of the slowest very special reveals ever in the history of very special episodes. And it turns out she did it on PURPOSE! This was a planned pregnancy. She and her boyfriend decided that the only way to get her father’s permission to marry while still in college was to get pregnant.

Wait. Huh? You need your dad’s permission to do stuff in college? Her fiancee had to drop of out school to get full time work but is unemployed! And they have no money! This is how you squander a booming 80’s economy, people. This really stupid master plan. Also, who thought that having a kid would be less expensive than eloping and paying for college? Or maybe getting married and not telling her dad. 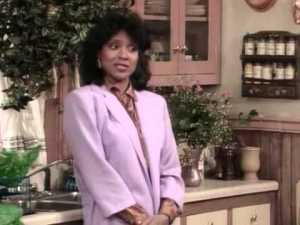 Anyway, she’s not a Cosby kid so we don’t have that much to talk about with her. Denise is freaked out by what Veronica told her, so she confides in Clair. Denise is all worried like what if I did something like that? Maybe I can understand it! And Clair is like you would never do that because that is something a crazy, selfish person does.

And you know what, yeah, that is something a crazy, selfish person does. But it’s also something a person who does not know math does. How did these people get into college?

Very Special Lesson: College is expensive, but nothing is more expensive than having a kid.

4 thoughts on “The Cosby Show: The Shower”