Ladies, and gentleman this will be the final installment of Friday Face Off! (For now. Mostly because I can’t think of any other match-ups at the moment.)

Last week’s very special winner is: THE GOLDEN GIRLS! No one should be surprised by this. You’ve all already expressed your undying love for The Golden Girls.

And today, we see the final showdown of the age old question “Who is better, The Partridge Family or The Brady Bunch?” Both shows traveled to Ohio to visit the Kings Island Theme Park. They both live in Calfornia, but I guess Disneyland wasn’t cutting it for them.

The Partridge Family: I Left My Heart in Cincinnati
The Partridges are actually at Kings Island for a gig. These people are always working. They don’t even have time for a family vacation. 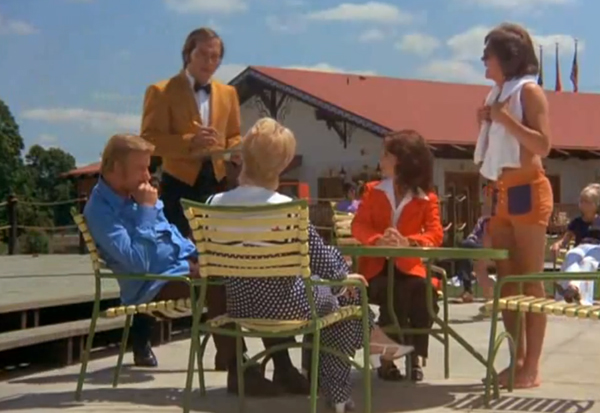 Keith won’t go on any of the rides after the show because he gets motion sickness and is afraid of heights.At this point in the show, David Cassidy was so popular and perfect, I think they had to start giving him ridiculous character flaws to explain why he was playing minor gigs in a family band instead of being the massive teen idol he was in the real world. Kind of like how they make pretty and fabulous women klutz’s in romcoms. Like “Oh she’s so unsuccessful even though she’s smart and gorgeous because she runs into things and falls over a lot.”

So it’s kind of like “Oh he’s stuck in a family band that plays at theme parks because he’s decided he can’t handle leaving the hotel room. This guy could never fly in a private jet to arena shows.” Then a hot PR woman (Mary Ann Mobly) shows up and wants to make their stay at the amusement park awesome, so Keith kind of has to follow his hormones and leave the hotel room.

Anyway, this lady is old enough to drink vodka on the rocks and we’re all led to believe that David Cassidy is 17 in this show, so he ends up trying to impress her by diving into the pool. He belly flops and Danny has to fish him out of the pool. Eventually, he rides all of the rides to impress this woman, and we get to endure this as a very long montage with 70’s department store music.

We come to learn that Danny is also in love with Mary Ann Mobly, and Keith is all like mom go tell him he’s just a child! And she’s all like Keith can you not see the irony here? And Keith is all like OMG I AM ALSO A CHILD! So then Keith decides to talk to Danny about why neither of them can date this thirty year old woman. Danny is refuses to listen to Keith, but Mary Ann Mobly ends up going on a “date” with their 8 year-old little bro anyway. They go to see Dracula Bites the World. Then we’re stuck watching another ridiculously long montage, but this one at least has David Cassidy singing.

The Brady Bunch: The Cincinnati Kids

The Bradys are also at Kings Island for work. Mike needs to present some architectural plans to the Kings Island folks. We are now five minutes into the show, and I feel like all we have seen is montages. But we do see Jan, Marcia, Alice, and Carol slide down a massive luge-type slide and it’s pretty much my only goal in life at this moment to alice be able to slide down that slide.

Greg meets a girl named Marge and decides to chase her around the park. Then everyone rides roller-coasters. Bobby and Cindy eat too much junk food. There may not be as much plot here, but as far as promotional episodes go, I’m way more interested in this amusement park as presented by The Bradys than The Partridges.

Oh wait here come the plot. Jan buys a stupid poster for a kid she babysits for and harasses her dad into combining his drafts into one cylinder instead of two, so she can use the other for her stupid poster. CLEARLY THESE TWO CYLINDERS ARE GOING TO GET MIXED UP, RIGHT?? So yeah, Mike Brady takes a Yogi Bear poster to his meeting and has to track Jan down in less than half an hour. THIS IS BEFORE CELL PHONES, PEOPLE!

Jan is busy driving Marcia around in the fancy old cars that Keith drove Lori in when The Partridges made this same visit. In the meantime, she’s lost the poster. WHICH IS REALLY THE ARCHITECTURAL PLANS! But once again, this is a clever promotion because The Bradys have to go through all of the rides looking for where Jan might have dropped the cylinder. Jan finally finds the cylinder in the bottom of a boat, and now it’s a footrace to deliver the plans in time. The Bradys relay race the cylinder to the manager’s office. But don’t worry, they make it just in time.

4 thoughts on “The Partridge Family vs. The Brady Bunch”