Eric is running for Senator of New York and he wants Riley and her friends to run the campaign. It turns out that this is a great idea (well in the world of this TV Show) because the incumbent senator has taken money away from the school budget and “given” it to his “rich friends.” (We only find this out because the dude who unearthed all of this fiscal drama happens to be sitting in Topanga’s bakery while Eric is talking to the kids.) They all decide Eric has a change at winning the election because he cares about schools.

Um. Right. For a show based in New York, I guess they forgot about Zephyr Teachout. Moving right along… 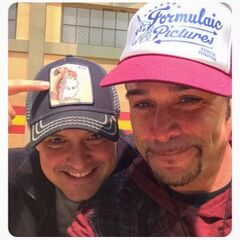 Anyway, Harley Keiner (former tough guy at John Adams High in Philadelphia, current custodian at John Quincy Adams in New York City) somehow gets involved in the situation. He’s mostly just there so Eric can not recognize him as Harley but think he looks a lot like Harley and then say some dumb stuff about how he wished he had beaten up Harely…only to realize he is, in fact, talking to Harley. But Harley handles it with grace because he’s mellowed and matured.

Shortly thereafter, Eric comes to realize that he was selected to run for senator by someone from the incumbent’s campaign because they thought he would fail. He then becomes very depressed and Riley and Maya have to entice him to get back to work with cocoa puffs, milk, and chocolate syrup. Very reminiscent of this:

So then they have a debate at JQA Middle School and the Senator is basically like: Eric Matthews has no experience, he has no children of his own (which is his entire platform), and lowering the voting age is kind of stupid (oh yeah the middle schoolers want to lower the voting age and it is kind of stupid). But then Eric is like just ’cause I don’t have my own kids doesn’t mean I don’t care about kids. And then the Senator is like “prove it.” And then the dude from Topanga’s bakery who had discovered all of the Senator’s fiscal shenanigans, is all like I can prove that Eric cares about kids! And it turns out that he’s actually Tommy, who you all may recognize as this kid:

And at this point everyone in Girl Meets World should 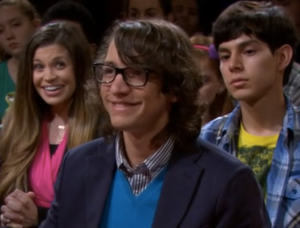 like wonder if they’re living in the freaking Twilight Zone because like wtf. But yeah. It does sort of tug on my heart strings, if only because Will Friedle is so lovingly like “Tommy?” And for some reason Topanga is in the background fangirling about this child she barely knew from like a decade earlier that Eric mentored. But then they actually play a clip of Boy Meets World in order to show who Tommy is because he was kind of a minor character and why on earth would kids who watch Girl Meets World know or care about him? I’ve come to accept that the Eric episodes are written for the grown-ups, thank God. And then Tommy is all like Eric gave me up because he loved me. And he talks about how he ended up with a great family and blah blah blah Eric is great with kids. Meanwhile, all of the tweens are filming this on their smartphones.

And like Eric and Tommy walk off arm-in-arm and somehow he now has a chance of actually winning the election? So Topanga and Corey pack up to leave the country just in case, leaving their children behind. The end!

Very Special Lesson: Remember how I mentioned The Twilight Zone above? Yeah, I think Girl Meets World is all just like a Twilight Zone future for the characters of Boy Meets World. Or like Eric is in a coma and dreaming this shit. Or something. But it’s like…it’s weird.