The girls have just returned from summer vacation and all of them have been busy talking to boys except for Tootie. Blair has brought back a couple of bottles of wine from her trip to France, but they hide it from Tootie because she is still a “child.” They plan to have a little party while Tootie is at drama club, but she walks in on them before they can even start drinking. (They want her to play Captain von Trapp in The Sound of Music, so she quits.) She threatens to report them (because she is dorm monitor for their dorm of 4 people). And they leave to go drink in the laundry room (so cool). For whatever reason, they leave an entire bottle of wine behind. Tootie decides to drink it to “prove that she’s not a child.” 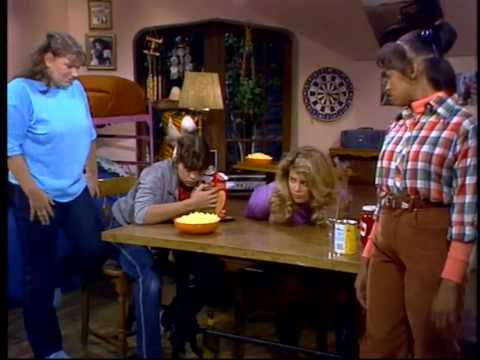 In some incredible dramatic timing, the headmaster shows up for a meeting with Mrs. Garrett. He’s also inspecting the dorm to make sure the “dorm” looks up to spec. Tootie comes down stairs to lock the door, but the headmaster and Mrs. Garrett catch her drunk. She’s about to be kicked out of school (for the second time in like a year. How is this even a question?). Feeling guilty, the other three girls tell Mrs. Garrett where Tootie got the wine. So they should all get kicked out, right? This is the second offense here with the underage drinking and sneaking around. But nooooo. Eastland is the school of 2nd, 3rd, and 4th chances. They’re all grounded for 2 months with no television and no dates (is that not already including as a term of the grounding?) Mrs. Garrett agrees not to tell the headmaster and warns them all that if they ever do this again, “they’re on their own.” Yeah right, Mrs. Garrett.

Very Special Lesson: It is virtually impossible to get expelled from the Eastland School for Girls.

2 thoughts on “The Facts of Life: Growing Pains”