Cory is soooo excited for Valentine’s Day. He’s putting a lot of pressure on the day because the previous year he cheated on Topanga with Linda Cardellini, and they broke up. But his mom is super pregnant with baby Josh, so Topanga has taken it upon herself to be helpful to the entire family–not just Cory. This messes up his plans and he gets really whiny. They’re about to have a gender-divided Valentine’s Day until Cory insists on throwing the baby shower Topanga offers to host for his mother. This family is pretty enmeshed, guys.

It turns out that Cory thinks baby showers are like bachelorette parties. He even hires a stripper. For his mother. It’s really weird. Meanwhile, Eric, Jack, and Alan play cards–with Mr. Feeny. Back at the Matthews home, Topanga has managed to salvage the bridal shower after kid-sister Morgan kicked Cory out of the house.

Topanga thought it was appropriate to buy Mrs. Matthews a sexy nightie and talk about how good she’ll look after the baby is born–so good in fact that Mr. Matthews will get her pregnant all over again. Morgan sits next to her mother and somehow manages not to barf. Then she gives her baby sweater to her mom for the new baby and is all bummed out that she’s not the baby anymore. Amy promises to spend more time with Morgan until the baby comes and then she immediately goes into labor.

Back at Eric’s apartment, Alan yells at Cory for selfishly ruining the baby shower. He’s too self-centered to realize that life goes on outside of Hallmark Holidays, and that his stressed-out and super-pregnant mom deserved Topanga’s attention more than he did. Amy delivers the baby via C-section and everything appears to be fine. But then the nurse notices the completely not at all premature baby actor breathing “irregularly” and they have to put little Josh in the NICU.

(Oh and also, Jack, Eric, and Rachel work out their love-triangle because Eric is some awesome and is totally cool with them dating behind his back and not knowing how to tell him.)

In the waiting room, Cory keeps trying to tell Topanga that there’s nothing in the world more important than their love and that is why they are getting married. Bleh. Anyway, Alan comes out and tells everyone that the baby might die and they all look horrified. It is awful. And then the episode ends. It’s not technically a 2-parter, but I’m not going to leave you hanging.

The NICU doctor wants to administer a 10-day course of antibiotics and then see how Josh does with that. Cory is freaking out and wants Topanga to fix everything. Cory is so needy at eighteen. I kind of forgot. I feel bad for Topanga though because he keeps demanding so much of her and like insists that she hold his hand as a magical cure-all. So she grabs his hand and says, “I don’t like it when you use us to hide from the rest of life, Cory.” OMG she’s so cool. Why can’t they let her be this cool on Girl Meets World?!

Then Corey says, “I don’t like it that you’re not Topanga anymore,” which is kind of mean, honestly. Topanga goes home and talks to Angela. She tells her about that time in the sixth-grade when she danced around and put lipstick no her face, and somehow feels that’s when Cory fell in love with her. They’re all at the hospital and Cory is still mad at Topanga for somehow failing to magically fix reality, and luckily Shawn shows up. (He’s been away searching his soul or something.) 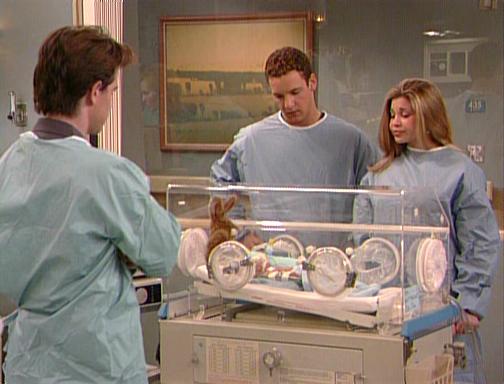 With Shawn and Topanga by his side, Cory is finally ready to go talk to baby Josh in the incubator. Then they all give this baby a pep talk about how he has to live because he is breaking their hearts. Shawn gives the most inspiring speech of all. He tells Josh that they have the best family of all and they don’t need to go anywhere else to find it. He wants Josh to get better so that they can have fun and make new memories.

By the end of the episode, Josh is doing well enough to go home. Then Topanga draws on her face with lipstick in order to show that she’s not all that different for her eleven year-old self. She draws on Cory’s face too. I remember really liking this episode as a kid because it acknowledged how drastically Topanga’s character had changed. But not it feels so oddly timed because Topanga had been pretty non-hippie and serious for a few years prior to this. I feel like Cory was so mean to her because she wasn’t “inspiring hope” when she was just trying to be realistic about a potential tragedy. Sorry, she’s not your coping-guru, Cory. Very Special Lesson: If your mom is really really pregnant and then you have a premature baby brother and you are annoyed that your girlfriend is growing up and it’s Valentine’s Day–get over yourself. Also, I am finding it more and more disturbing that Cory and Topanga were engaged at eighteen. But oh well, at least they worked through this.