Did we know Uncle Jesse was a high school drop out? I don’t remember knowing that, but anyway he is graduating from night school in this episode. In fact, he is valedictorian. Everyone gets to go to the graduation except for his two toddlers. Even Michelle, who is in like the first grade, gets to go. She’s also on a big environmental kick, so she insists that they use public transportation (where we discover Danny’s face has been de-faced on an ad).

And suddenly, the entire Tanner family is transported to Brooklyn.  Even the guy they yell at for littering seems like he’d be more comfortable in Bay Ridge than by the Golden Gate Bridge. We cut away to Kimmy babysitting the twins, and then cut back to what looks like a D train going through a tunnel. Then the train stops due to an electrical problem and Jesse freaks out that he’s going to be late for his commencement. I mean, I think he should be more freaked out by the fact that he left Gerard Street ten minutes ago and somehow ended up in the Bronx, but you know, to each his own. And more importantly, what’s up with this 6 Diamond and how did the Tanners get to the east side? Just a couple of years in New York City ruined all establishing shots of public transportation for me. 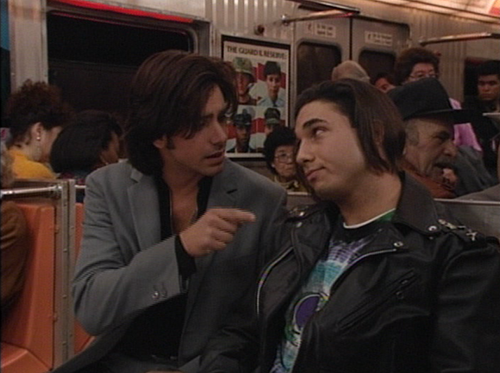 So it turns out he will totally miss his graduation, and he’s really upset because now all of his teachers will think he’s still a screw up and blew the whole thing off. Some punk kid overhears him talking to Rebecca and tells Jesse that dropping out was the best thing he ever did. He asks Jesse for spare change and says that begging on the subway–er, Muni–is way better thanreading books by dead guys. And Jesse’s all like “I know who you are and where you’re going. You know where that is? That’s nowhere.” Um okay that’s a bit presumptuous for someone you just met on the train.

So then the punk kid is all like “school is hard.” And Jesse is all like “life is hard, man.”  Jesse sits him down and gives him his valedictory speech. So then the whole subway yells at him to go back to school. And some man plays Pomp & Circumstance on his saxophone and Jesse bows in front of everyone. And that was all it took to get that dude to want to go back to high school! Wow! Why don’t we all make speeches to strangers on the subway! It seems like they totally listen and are grateful for your invasively wise words.

Very Special Lesson: You know all of those people who drop out of high school and claim its because of lack of familial support or age inappropriate responsibilities thrust upon them at an early age? It turns out that it’s just that school was too boring and they simply prefer to ride the subway around all day. Be sure to share with all of them the importance of your education and how easy it was to get it while living with your wonderfully supportive family, all of whom attended your super delayed graduation! It’s so inspiring, isn’t it!