The ghostface mask haunted my childhood even though I never saw the movie. In the fourth grade, my best friend dressed up as the ghostface killer for Halloween and I wanted nothing to do with her. As it turns out, I really should have heeded this warning as she turned out to be a colossal sociopathic bitch but that’s a story for another time.

Anyway, fall is in the air, Halloween is just around the corner, and I’m feeling Drew Barrymore’s haircut. It’s been like almost 20 years since this movie came out and that probably means that I’m now old enough to see it, right? I got a little spooked in part of The Mystery Files of Shelby Woo and the opening credits to Are You Afraid of the Dark? still terrify me…so it’s possible that this is a poor choice. 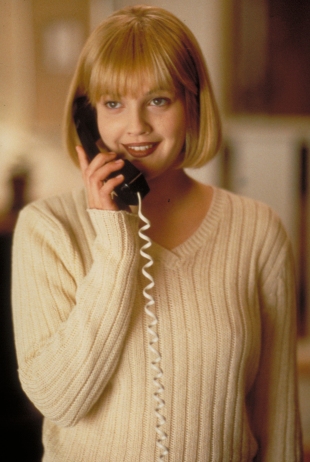 Spoilers abound, but I trust that everyone else on the planet has seen this movie by this point in time. I mean by the time the phone rings for the third time, I feel like Drew should seriously stop answering it. Poor Drew. I really just want to hang out with her and be her friend right now and this dude is being such a monster. (Am I getting too attached to these characters?)

DON’T TURN ON THE PATIO LIGHT. OMG WHYYYYY. Why don’t these people listen? Where are the parents?? She should not have turned off the light. Steve was like totally telling her not to turn off the light. Drew, I wanted to hang with you and I know you are traumatized right now but you’re being dumb as shit. I am now hearing weird noises and refusing to look at the screen. The rest of the movie-watching may very well proceed in this manner. Poor, poor Drew. This is so sad. Okay, that’s it. I’m totally invested now and we have to find this ghostface killer and make him pay! What an asshole!

boyfriend, Billy kind of looks like a poor man’s Johnny Depp. I feel like he’s a jerk though. OMG the Fonz is in this movie?!? Oh crap, and it’s super heartbreaking what happened to Neve’s mom! Also, like really really odd that her dad would leave her home alone only a year after that happened…such a horror movie setup.

Is this town just filled with the best houses ever? Like if people weren’t frequently brutally murdered here, I would seriously want to move to this town. Also, could you actually call 911 from a computer and like instant chat an operator in 1996? That’s probably a movie thing, right? 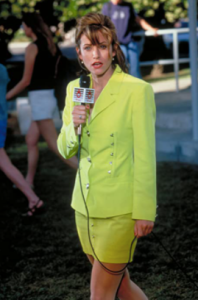 Woah, I did not even recognize Courtney Cox. Her hair is so different than what I’m used to! She does seem like a bit of a jerk but Neve is probably being too hard on her. Also, I feel like Neve maybe wasn’t that close with her boyfriend if she could think he was the murderer just because he had a cell phone. I mean, maybe he’s just really on trend. But like I still hate him. Billy is a loser. But is he a killer??

I’m so into this movie. How did I hide from it for years? It’s soooo good. What if Henry Winkler is the killer? I also believe it could be Rose McGowan or David Arquette. Okay, did I just name everyone in the cast? Anyway, this is obviously a much better use of my time than the pounds of laundry I have to do. (Some days, I miss fluff & fold.)

Aw guys, remember when David Arquette and Courtney Cox loved each other? And she was even Courtney Cox Arquette for a little while?

Maybe, the killer is Neve’s dad. I mean he’s been “out of town” like the entire time this has been going on and he’s not at that hotel he said he’d be staying at. Ugh, okay video store guy just accused the dad of being a red herring. This is so meta. Love it.

Billy really is weird, but I think he’s the red herring. Everyone is a red herring! Okay, but yeah her dad is definitely a red herring. Kind of wish I was seeing this in a movie theater where I would have lost all track of time. But no, here I can see there’s an hour left and there’s no way he’s the bad guy.

Also, I feel like these kids are being kind of rude having a party right now with all of the awfulness going on in their town. And I guess, Rose McGowan is also not the killer. It was pretty ambitious of her to try to make it through a door made for a cat. I mean she certainly went down swinging.

Is Billy a red herring or not??? Omg and then all of these sick teenagers rush over to the football field to see poor Henry Winkler’s body there. That’s just wrong. Like wtf. I mean maybe this is actually some kind of hell-on-earth with awful people and a psycho killer and that’s just the natural order of things in this town.

Okay. I guess Billy is pretty definitely not the killer since he was just murdered right in front of Neve. Woah.
Courtney Cox NOOOOOOOOOOOOOOOOO
David Arquette too??

This movie is just full of heartbreaks. 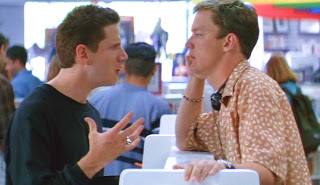 So who did it? Video store kid or Shaggy from Scooby Doo, the live action films? Also, it’s truly remarkable that Billy is still kicking. Don’t give him the gun though. Everyone alive is still a suspect!!! OMG IT IS BILLY. I knew he was a jerk! This went back and forth for so long. So who is his accomplice? SHAGGY FROM SCOOBY DOO! What will the Mystery Team say??

And they framed her mother’s killer too?!? That’s some sick shit.
Well, really this just teaches you not to be friends with psychos. 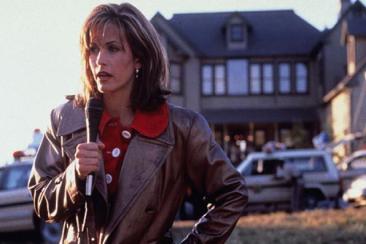 Omg, yay Courtney Cox hooray! Now you and Neve can be best friends. Oh gosh darn it. This never ends. How in the hell is Billy still alive? Okay, Courtney Cox to the rescue for real this time.

You guys, this was an emotional roller coaster. I do not think I could handle this again. I just really hope that this town/school system has provides experienced crisis counselors, free of charge, to everyone involved. This was a freaking psychological war zone. But I still think Drew’s hair is really on point in this film.