Looking at this as a total outsider/new viewer, I would say that BraveStarr kind of throws a Jem vibe–except if Jem were filled with cultural misappropriation. So basically they live in a futuristic space-cowboy land. It’s a space-version of the wild west complete with fringed tops and bolo ties. And BraveStarr is the marshall of this space town.

Things get pretty intense pretty quickly. Like 3 minutes into the show, some dude is flipping out and ready to kill everyone because he thinks there are spiders everywhere. There’s also a line that I swear sounds like “You want to eat me, but I’ll let you.” What is the rating on this? Am I old enough to be watching this? 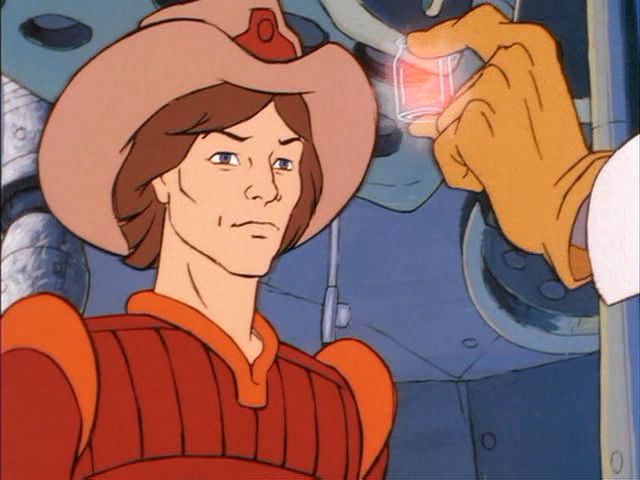 So then Bravestarr’s horse/partner restrains the hallucinating guy, who is apparently high on a drug called “Spin.” All’s well, right? Nope. We cut to a personified wolf selling Spin to kids. They probably trust him because of his British accent and three-piece suit, but one of them is smart enough not to let him pour the effervescent/seemingly on fire liquid that is “Spin” into the palm of his hand.

Yep, that’s how you do Spin, kids.  A creepy wolf-man will pour some magic liquid into your palm, and nope you are not yet high on drugs. I will say that this episode is probably the best personification of the “drugs as black magic” motif that seemed to haunt all of my “educational” anti-drug lessons as a child.

With each passing moment, the people of space-cowboy-town are dying from the Spin epidemic. The little kid who was like hell no, I am not doing Spin, almost tells the marshall about the wolf-man pusher. But he remembers that he promised he wouldn’t tell. So then his friend keeps doing drugs, and then he starts to speak in a creepy voice. He literally sounds like he has had a lobotomy and like spin is the only word he can remember how to accurately pronounce.

But the straight-edge friend is still trying to keep his promise, so he leaves his friend to hallucinate alone in a room while he goes off to think. The kid’s just kind of like well, my friend is in trouble but I promised I would keep a secret. But he might die. And the shaman is like promises are important but so are lives. And the kid is like omg, yeah! But he doesn’t tell the shaman. Instead, he runs off to find BraveStarr but he just narrowly misses him. See, it seems like maybe he should have told the shaman.

OH my gosh those wolves are dingoes! Okay, so are we in Australia? I’m not sure exactly what’s going on with this galaxy, but BraveStarr arrests a lot of dingoes for selling Spin. Finally, the kid gets in touch with BraveStarr and they try to save his friend, but it’s too late. This death is supposed to remind us all not to do drugs. But I feel like maybe it’s just reminding me not to take weird liquid from a wolf-man. I’m pretty sure that I would never do that anyway.

Very Special Lesson: I feel like I should let you watch this PSA for yourselves:

7 thoughts on “BraveStarr: The Price”