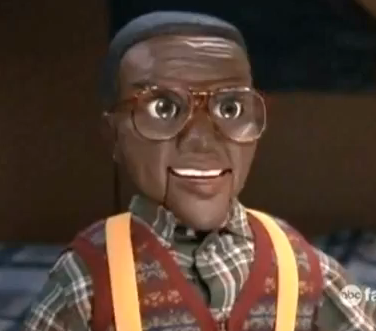 This episode is terrifying. It’s so abnormal for Family Matters to pull something like this that they had to have Steve warn the audience that this episode is “a little scary” (a.k.a. get the kids out of the room, or they will all have nightmares forever). Well, I was a kid that was not removed from the room, and thus ventriloquist dummies have been horrifying to me ever since. Today, I conquer that fear.

Steve makes a ventriloquist dummy that looks exactly like him. But he sucks at being a ventriloquist. So he goes to bed feeling dejected, and in the night lightning/a demon spirit strikes the dummy and he basically becomes the spawn of Satan. You know, good clean Halloween fun.

Steve wakes up in the night and the dummy speaks to him in the most frightening voice I can imagine. It’s second only in scariness to a Furby when the batteries start to die. (I even removed the batteries from mine and it still talked!!! So I locked it in a cabinet for years because it was obviously evil.) Steve tries to tell everyone about the demon in their house, but no one believes him.

Then we learn that apparently this only happened because Steve wished that the dummy could talk. Also, the dummy hates the Winslows and pretty much wants to murder all of them. And by pretty much I mean literally. Wtf. This is a family show. It’s called Family Matters. You can’t just have creepy dummies murdering the family puts the family in Family Matters.

Blissfully unaware, the two youngest Winslows head out to trick-or-treat as Michael Jordan and Scottie Pippin. Carl warns them not to eat any of it until he has time to inspect it because everyone was worried about razor blades in candy in the 90’s. Anyway, Steve thinks they’re all safe because he’s locked Stevil away (just like my Furby), only Stevil finds a way out of his prison!

He sneaks down the chimney and tricks poor, dumb Eddie into thinking he’s Santa. Then he straight up kills him. One of the Winslows is already dead! Then Stevil chops Laura up into pieces and puts her body in all of the kitchen cabinets. It’s horrible, but she can still talk and quip and I guess that’s somehow supposed to make us feel better. But it doesn’t make us feel better! It makes us think that we could be chopped into pieces and live to tell about it as a decapitated person. Ugh!

But the worst, the absolute worst, is when Stevil turns Harriet into a jack-in-the-box. Like this is actually going to give me nightmares right now at 25 and I have no shame in that. So then, Steve goes into the living room to tell Carl that Stevil has dismembered literally everyone in his family.

And Carl laughs. He doesn’t believe him. It’s all so ridiculous. He tells Steve to lighten up. AND THEN IT TURNS OUT THAT CARL IS STEVIL’S VENTRILOQUIST DUMMY. The only thing left to do is for Steve to physically fight Stevil, which is surprisingly hard. I mean Steve doesn’t have the best hand-eye coordinator, and for a while it seems like Stevil will probably win this fight.

VERY Early Halloween Lesson: But, like do you guys think I should call my dad and warn him about the Furby that’s locked in a cabinet in my childhood bedroom?