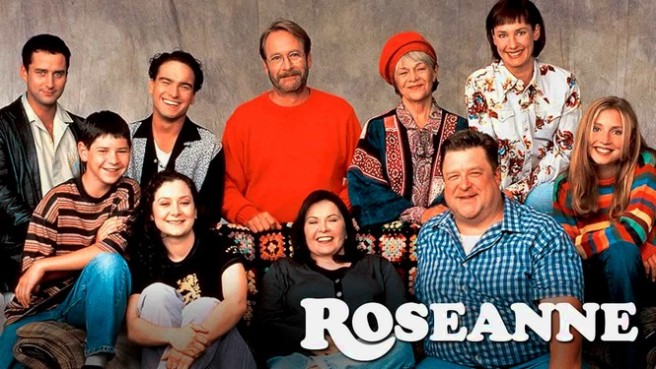 So I actually wasn’t allowed to watch Roseanne as a kid because it was too crass. But I did catch a few re-runs in high school and thought it was pretty funny. This, friends, is not a funny episode.

It opens with Darlene and Roseanne telling DJ that their grandma is in a mental institution. Then we learn from Dan that she’s had multiple breakdowns over the years because Dan’s father was “abusive.” And by “abusive” I mean he traveled for work a lot.

Dan gets really drunk decides to go over to his Dad’s new wife’s house and tell her that she’s in a bad marriage. Only, she isn’t actually in a bad marriage. Actually, Dan’s dad is a nice guy and his mom had been in and out of mental institutions long before she ever met his father. Depressing enough yet?

Well hold on, it gets worse. Dan’s father has just been letting Dan blame him for his mother’s problems forever so that Dan wouldn’t think less of her. But like now he just has a mom who is in a mental hospital and hates his father for no reason…so how was that a good idea???

So then Dan and his dad makeup once Dan knows the truth. Omg. This was sad for no reason. Today is just a sad day all around. I’m going back to live streaming Prince’s music.

Very Special Lesson: I don’t think alienating your children is ever the right solution to someone in your family having a mental illness, but that’s just me.

6 thoughts on “Roseanne: Lies My Father Told Me”