First of all, Happy Festivus everyone! I was so busy airing my grievances that I’m just now able to take a break and get this post up. I’m also didn’t bring my laptop with me because I didn’t want to haul it around in my luggage, so I was similarly delayed both by having to borrow a computer and my inability to remember my WordPress password. 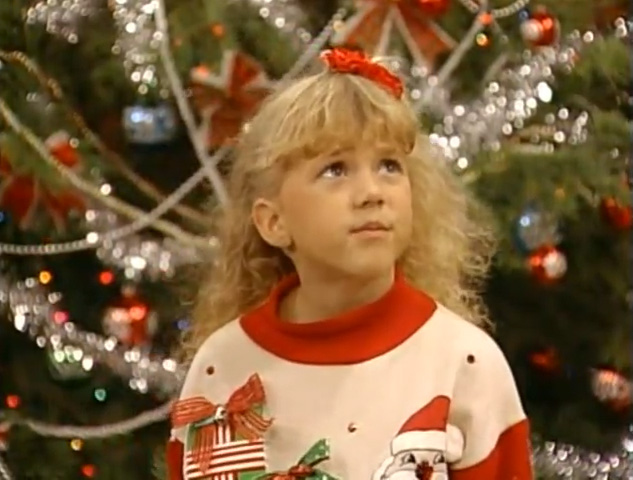 Okay, okay, let’s do this. The Tanners are taking a trip to Colorado and Stephanie does NOT want to go on the trip because Santa Claus won’t know where to find them. The obvious answer here is that there’s a lot of other magic kids buy into with Santa, so why shouldn’t he be able to track them down wherever they are? I mean the whole Santa figure is surprisingly omniscient: “he sees you when you’re sleeping, he knows when you’re awake.” That’s creepy, creepy stuff, man. The whole myth is a major invasion of privacy and yet we’ve somehow romanticized it because we’re materialistic creatures who like to rip open shiny, glittering packages.

On the plane, they bump into Danny’s co-host and Jesse’s future wife: Rebecca Donaldson. Jesse immediately asks her out while they’re in Colorado, and she’s like “nah, I’m just changing planes in Denver.” Stephanie and DJ get upgraded to first class, where Rebecca is also sitting because I guess she got $$.

Back in coach, Michelle pets a man’s toupée because she mistakes it for a kitty cat. He makes her cry. This is an excuse for the guys to sing “The Girl From Ipanema.” However, a giant snowstorm (that I guess NOAA failed notice) forces them to make an emergency landing in a dinky little airport in the middle of nowhere. Steph freaks out because SANTA WON’T FIND THEM OMG.

So maybe now is a good time to be like, “Listen, honey. Christmas isn’t about presents. It’s about being stuck in an environment that you do not want to be in but you do it anyway because family.” Instead, they let her use the payphone to try to reach the North Pole.

But then we dive deeper into the realm of delusion because DJ (not knowing that the airline has lost the bag containing the gifts) decides to tell Stephanie that Rudolph the Red Nose Reindeer has radar in his nose. So then Danny has to do a little damage control and say that the radar in Rudolph’s nose doesn’t always work, so Santa might take a few days to find them.

Meanwhile, Michelle keeps trying to pet that toupée. They really should take this kid to see an actual cat because she’s getting some pretty confused thoughts about what they look like.

Joey decides to dress up like Santa to talk to Stephanie and explain the present situation. (Because you know he just travels with a Santa Suit ugh this guy wtf.) This completely backfires when Michelle recognizes Joey, but Stephanie doesn’t. Feeling betrayed, she retreats back to the phone booth. (Twenty years later, I would love to be a fly on the wall of Stephanie Tanner’s therapy session.)

Sick of the whining about presents, Jesse decides to rally the stranded travelers into singing carols and decorating a coat rack like a Christmas tree. Stephanie does not participate because she’s still chilling in the phone booth.

Jesse and Becky kiss under the mistletoe (that just happens to be hanging over an airport coffee vending machine), setting in motion the wheels of their future romance. (Do you think she’d do it all again if she knew that she’d have to move in with his brother-in-law’s family and live in an attic with her babies?)

Then the REAL Santa shows up. He makes the presents reappear and leaves them a note on an ancient laptop.

Stephanie tells everyone she saw Santa flying away outside and they’re like “huh?” but decide to go open the presents rather than INVESTIGATING FURTHER! Then Stephanie sees a personalized note that no one else sees. (Man, now I really want to be a fly on the wall at her therapy sessions.) 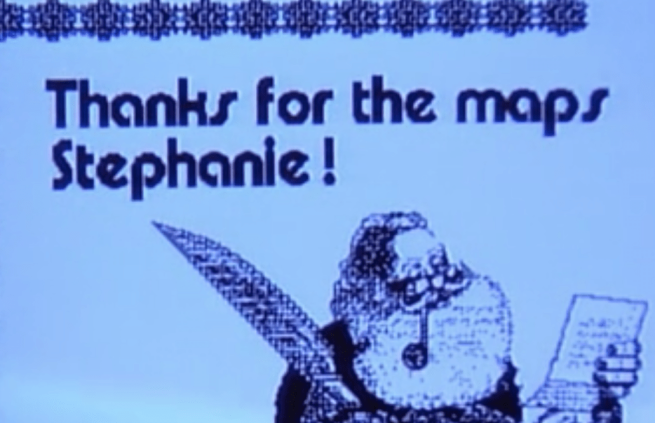 Very Special Lesson: Everyone on this show is telling me that airport Christmas is the best Christmas ever, but I’m suspicious.

One thought on “Full House: Our Very First Christmas Show”