Happy fifth night of Hanukkah, Very Special Readers! Here we are in the final season of The Nanny. Fran is finally married to Maxwell, and she gets to host a Hanukkah celebration with her new family. Also this episode marks Ray Charles’s final appearance on the show–because Ray Charles had a recurring role on The Nanny???? You learn something new every day. Sadly, Maxwell has to go out of town for business. CeCe is going too but she and her long-standing enemy, Niles are “in love” by this point in the show, so I’m glad to see her gone. (He gives her a lemon Pledge soaked handkerchief to remember him by because he’s a butler and evidently that’s his dominant personality trait in the relationship ughhh). And for some reason the youngest child, Grace, goes to Boston with CeCe and Maxwell. Is she like a theater producer in training? I have no idea. I’m only just now realizing that the last season of this show wasn’t great and evidently I haven’t seen many episodes of it.

Fran is very upset that her stepdaughter and husband have left town on the first night of Hanukah. We learn (via flashback where Fran plays a younger version of her mother) that It’s very important to her that they celebrate this night together because she never spent the holidays with her family as a kid. 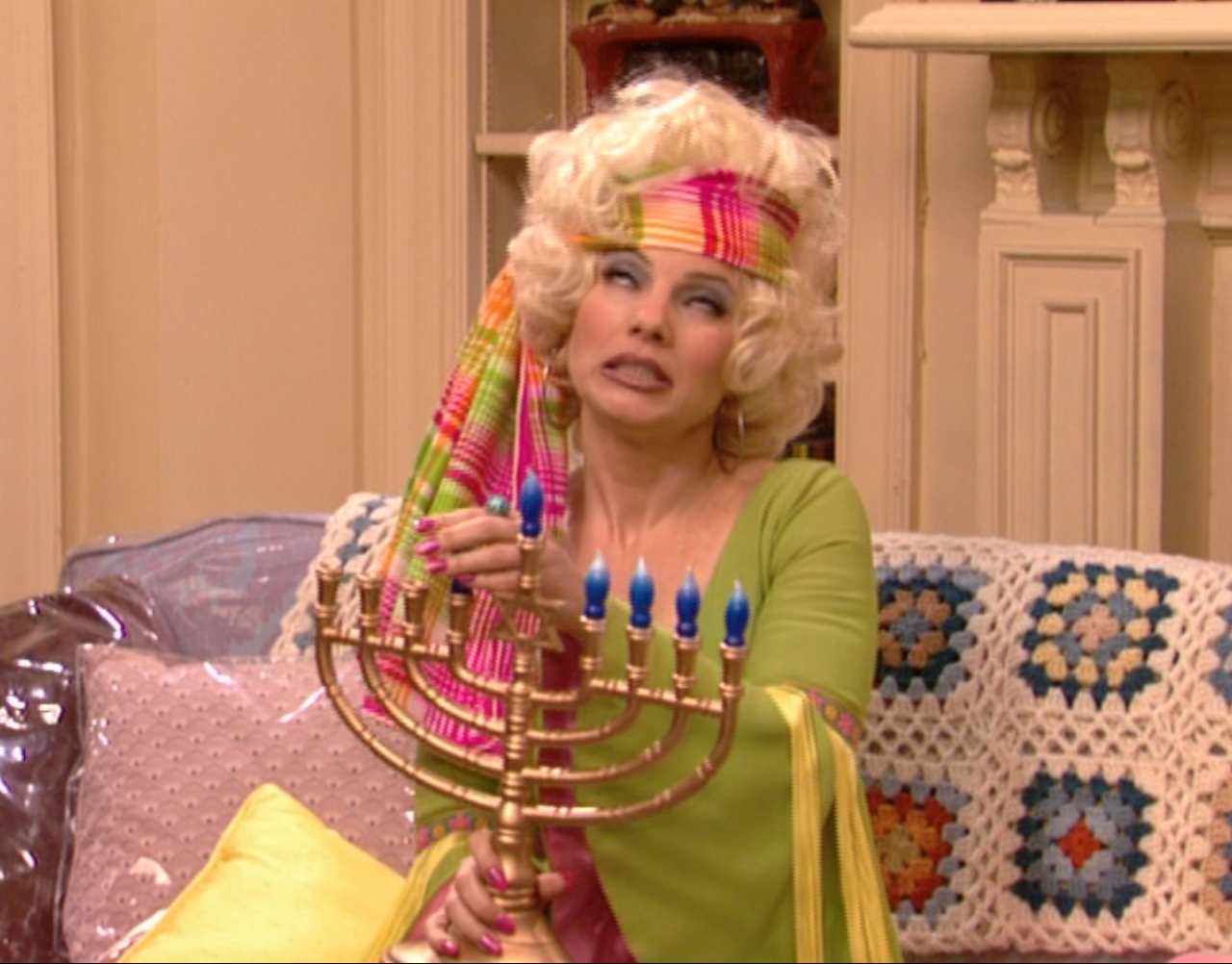 Meanwhile, in the car to Boston everyone is crabby. We learn (again via flashback) that young Maxwell puts business before family because that’s what his father (played by grown Maxwell) did when he was a child. We also learn that young Maxwell and young Niles played together as children! (Mostly because Maxwell’s father was neglecting him but aw that’s still a cute backstory!)

Realizing his mistake, Maxwell decides to turn back. He phones Fran from the car to let her know he will be coming home for Hanukkah. While they’re on the phone, Fran hears Maxwell crash the car mid-blizzard. So what I’m trying to say is that this sitcom has dramatically increased the stakes with only ten minutes remaining, And no, this isn’t a two-parter.

Meanwhile back in the car, (it’s The Nanny, they’re obviously not injured you guys), CeCe tries to sing for entertainment. It’s not very pleasant and luckily we cut away quickly. Maxwell determines they have enough gas in the car to run the heat for an hour.

I suppose because they’re anxiously awaiting news or the return of Maxwell’s car — Fran and her best friend Val are waiting outside of the townhouse in the freezing cold. Fran prays to God for help and a nun appears. Fran assumings that God must have gotten confused because of her new last name (hehe). 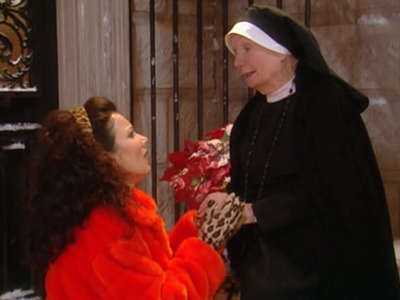 Fran and the nun pray together and wow–I guess she was right to wait outside! — Maxwell appears! He actually had enough gas to run the car for eight hours and was able to make it all the way home. It’s a Hanukkah miracle! Literally and figuratively! 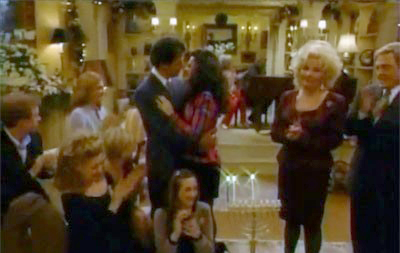 They end up celebrating the first night of Hanukkah on the second night. And then Ray Charles plays “Home for the Holidays.” I think he’s dating Fran’s grandma. Is that what’s happening here? Someone more familiar with this show, please weigh-in on the comments. Was Ray Charles even an actor? Was he just moonlighting on the The Nanny near the end of his life for fun? I need to know more about this odd turn in his career!!

One thought on “The Nanny: The Hanukkah Story”