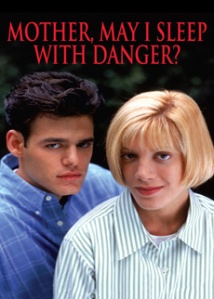 This movie fades in from white, so you know it’s gonna be intense. There’s also some ominous David Lynch style music and some dude watching a house from his car. I wish I could scream at the nondescript blonde female, “Don’t undress in front of your window! You don’t know who is out there!” But alas, I cannot get this TV movie character to hear me. I must helplessly watch the sad tragedy unfold.

The super creepy dude is actually the blonde girl’s boyfriend. He flips out when he notices that the pictures and poems that he gave her are all boxed up. She explains that she is having her room painted. But even if she were lying that, is no reason to straight up murder her, which is what he does less than five into this movie.

Next, we meet Laurel, a college student played by Tori Spelling. Laurel is trying to move up in the track team, but her mother calls her coach and says that Laurel has an eating disorder. Concerned that Laurel is over-training, the coach cuts her from the team. This is clearly a devastating blow, but Laurel is excited about her new boyfriend, so she forgives her mother’s meddling and they plan an introductory dinner.

OH MY GOSH THE NEW BOYFRIEND IS THE MURDERER! His name is Kevin but it may as well be Danger. It turns out that Kevin lost his parents in a helicopter-skiing accident (he says, “they died doing what they love”), but I can’t help but wonder if he murdered them. He’s already planning how he and Laurel can work at the same place and “never be apart”…

Kevin ends up in a major depressive episode when Laurel tells him she needs to study and can’t hang out. The next day, he sends her flowers and she decides he is not so bad. Kevin also does this weird serial killer hand twitch thing when he talks about his abandonment issues or stalks his girlfriends. He is doing it while talking about how he was worried that Laurel would leave him forever and she’s all like “aw you’re so sweet and not at all scary, let me have sex with you.” And it’s just like, Tori Spelling, NO! Did you learn nothing from that time you had the abusive boyfriend on 90210?

But she has not learned cross-film and so she has to learn that lesson again as a different person in a different television feature. Kevin convinces Laurel to dye her hair blonde. He’s Kim-Novack-ing her Vertigo-style. She now has the exact haircut and color of the girl he murdered at the beginning of this movie.

But he’s also kind of Kim-Novack-ing himself. It turns out that he has stolen the identity of the dude who his original girlfriend was hanging out with on the day that he murdered her. (Right? I know. It’s so intense).

Billy (fake Kevin’s real name) then stalks the real Kevin (who has resurfaced and applied to the same college that Billy is attending as Kevin). He follows Kevin and pretends to work at Kevin’s hotel–under the guise of catching up with an old high school acquaintance–and murders him Psycho style in the hotel bathroom. This movie has a lot of Hitchcock references.

Billy’s next move is to isolate Laurel in a cabin. He then attempts to drive a wedge between Laurel and her mother by telling Laurel that her mom says Laurel needs to be put in an institution because of her eating disorder. He promises her that he won’t let that happen and they make out vigorously. Their passion knocks over a bottle of red wine and it oozes ominously over the floor, foreshadowing the bloodshed yet to come.

Laurel catches onto the situation when Billy sabotages her car and she has to walk two miles to a pay phone. A male friend picks her up (which stalker Billy sees and does not like) and stays with her while she calls the phone company. When she discovers that Billy never placed an order to have their phone line setup, she knows that he is trying to isolate and control her.

Meanwhile, Laurel’s mom has no idea where Laurel is, so she starts to investigate the conflicting information Billy has given while spinning his web of lies. In a police station, she notices a missing person’s picture that she recognizes from Kevin/Billy’s apartment (which she broke into). She also notices the eerie resemblance the missing girl bears to her post-makeover daughter. Then a detective sends her a copy of the real Kevin’s driver’s license because cops just hand that stuff out to inquiring mothers. Laurel’s mom tells the detective that he is not Kevin and they begin to investigate Billy Jones (!) whom the detective was suspicious of in the original case.

Laurel tries to move out, but Billy catches her and is totally going to murder her. Laurel manages to get away from him and decides that the best choice in her self-protection is to go dancing. We already know that Billy is an expert stalker, so he finds her and assaults her male friend. Frankly, I find it remarkable that Laurel is still alive. Billy has obviously gained a modicum of self-control since he murdered that other girl at the beginning of the movie.

In the last twenty-minutes of the movie we get a creep shot of Billy getting on his motorcycle at the cabin in the woods. Now he is the one being stalked. But who is his stalker? It appears to be Laurel attempting to retrieve the rest of her things. Why, Laurel?? She leaves the house only to find him sitting on her car. You cannot out stalk this guy. You just can’t!

He tells her he wants to make one last toast, so they can leave as friends. Laurel, why did you drink that tainted wine? Why, Laurel, why?? Luckily, Laurel’s mom is hot on the trail and she confirms that Billy Jones is Laurel’s boyfriend. She discovers that “Laurel” a.k.a. Billy has just used her AAA card on the way to her cabin.

Isolated in her mother’s cabin, Laurel must once again try to escape. Billy chases her with an ax. When her mom shows up, he roundhouse kicks her in the face. Laurel attempts to escape in a rowboat. This is not the most effective means of escape. She probably should just swim for it–like Billy who capsizes her rowboat from beneath the water. Then he attempts to murder them both on the dock with the ax. There’s less than 2 minutes left in the movie now.

Omg. Tori Spelling uses her mom has a human shield. This is so wrong. Oh wait, at the last minute she throws her mom out of the way and hits Billy in the head with an oar. Billy drowns. Mother and daughter walk off arm in arm. Woah.

Oh crap. Billy isn’t dead. He shows up at the end of the movie with another blonde co-ed and he’s looking oddly like Adrian Grenier.

Very Special Lesson: Don’t date anyone ever. This person will stalk you and ruin your college education.

6 thoughts on “Mother, May I Sleep with Danger?”