This is difficult to judge and a horrible matchup to start off with because both of these episodes kind of suck. I think they suck pretty evenly so I stand by my decision to pair them off with each other, but I’m sorry that they are the first things I wrote down on the bracket.

Family Matters definitely wins on the overall plot. That’s mostly because there is not much of a plot to the Roseanne episode.  I watched a little bit of an interview with Roseanne in which she admitted that the entire reason for this episode was due to the fact that they lobbied the network to let them film a Disney episode simply because they were jealous that lots of other shows were getting a free trip. This makes sense if you think about it because Family Matters is an obvious choice for a Disney promo whereas Roseanne is well not…

In Family Matters, Steve wins a chance to compete with his DNA altering machine (you know that thing that switches him from nerdy Jaleel White to cool Jaleel White) at Innoventions in Epcot. Laura decides that she wants to be with Stefan (cool Jaleel White) forever, so she disables the machine mid-demonstration. This is pretty creepy since basically she’s just killed Steve Urkel or is holding him hostage. I’m not quite sure which, but I guess if Stefan is a legitimate person too then like is Steve always holding him hostage?? 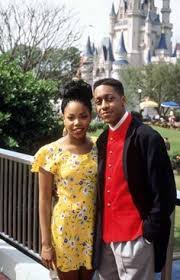 Anyway, Laura is definitely not having this major crisis of conscience and neither is the rest of her family because they are going to allow her to marry Stefan after he proposes to her on the steps of the castle (with Cinderella’s help) while all of the theme park attendees look on. I know everyone hates Steve Urkel, but this feels like a crime against nature/humanity/why am I the only one distressed? I don’t know, but ultimately Laura feels guilty about the fact that she basically murdered her next door neighbor in order to date a cooler version of him, and she makes Stefan fix the machine. This leads Steve to withdraw from the competition because he realizes that mankind cannot handle a DNA altering machine. No shit. Have you seen Jurassic Park? Meanwhile Carl learns how to be a kid again by chilling out and riding a ton of rides. He almost moves the entire family to Orlando just to be closer to Disney World. (I too have had this fantasy in times of desperation). But ultimately Carl realizes that this is ridiculous and they all return to Chicago happier and healthier.

The plot of Roseanne is that everyone in the family goes to Disney World. And also Darlene really really likes Winnie the Pooh. I super like that because I also really like Winnie the Pooh and totally had lengthy conversations with him at Disney World long after I knew he was a person in a body suit. And the magic of Disney is that you can seriously trust that it’s not at all creepy to have that conversation, even though I was eight and Darlene is like eighteen. But even this charming moment is not enough to salvage the plot.

I almost want to give the fashion point to Roseanne because I’m really digging Darlene’s leather jacket, but other than that they all look awful. Also, it’s unfair to ask them to compete with Laura Winslow and Stefan because they are a gorgeous couple. So once again, point for Family Matters.

I am totally torn about who to give the point to for overall integration of Disney setting. In Roseanne, you get to see more of the park locals, but they are pretty much just running through everything. Dan seems to be doing the Drink Around the World thing at Epcot, which is cool. But other than that they are mostly like “OH HEY LOOK AT THIS” and yet you barely see them on a ride. At one point, two of the characters even list all of the rides that they just did, but you don’t get to see those. Because of this, I think Family Matters has to win. Also, I like that they set a lot of plot development conversations at yummy restaurants. For example, when Stefan asks Carl for Laura’s hand in marriage (ugh) they are eating at that little outdoor cafe near the Brown Derby in Hollywood Studios. They also show Carl meeting a ton of characters, and he announces his plan to move the family to Orlando on The Tower of Terror just before the elevator drops…so yeah that’s some good setting integration right there.

The music sucked the most as far as I’m concerned. The only redeeming factor was once again Family Matters, which had a cool cover of “Kiss the Girl.”

One other notable thing happened in both of these episodes that I’m hoping someone can please explain to me. In Roseanne, Dan offers one of the kids a summer sausage from the minibar fridge after telling the whole family not to worry about cost at all the entire time they are in Disney World. In Family Matters, Eddie’s friend Waldo offers hitchhiker a summer sausage in. The Roseanne incident happens on Disney property, whereas the Family Matters incident happens in the car and neither Eddie nor Waldo ever make it to Disney World. (They accidentally drove to Canada.) I’ve never heard of a summer sausage before this. Am I just not up on my sausage or was Disney trying to run a promo on sausage of the summer variety?