Warning: This may be the most frustrating episode of Full House ever.

DJ gets a date to the junior high school dance with her big crush. This is a super important event for her because she’s also planned the entire dance. When the band she’s booked falls through at the last minute, she get Uncle Jesse to fill in–which means he’s there to witness all of the UNDERAGE DRINKING!

But first, check out this video of Uncle Jesse performing with the only available backup musicians–The Van Atta Junior High Marching Band.

Meanwhile, DJ’s date has been too shy to handle all of the social interaction at the dance. So he’s decided to drink beers with a couple of other boys. He finds that the beers really take the edge off, but this does not impress DJ. She tells them how stupid they are, and attempts to show how ridiculous they look by holding a beer and mocking them.

This is not an effective method of deterring teenage drinking, but I’m sure Nancy Reagan’s “Just Say No” only confused poor DJ and she really believed this was a helpful teaching tool for her peers. Anyway, at that exact moment Jesse walks out into the hallway and sees them. Fine, you think. She’s not drinking it, she’s holding it. He will understand what’s going on here. 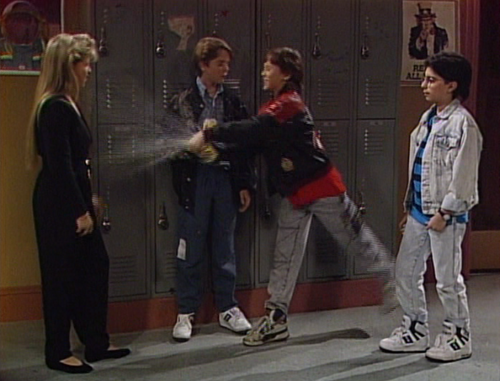 But one of those preteen lame-os sprayed DJ with beer when she walked into the hallway! So she smells like beer, is holding beer, and is commenting about the beer to a group of peers. This looks pretty bad. But Uncle Jesse is a trusted adult who understands DJ’s integrity and he will believe that she’s just mocking them, right? Nope.

So Jesse takes DJ home, grounds her, and reports all of this to Danny and Joey. Okay, fine. Joey is such a softy, he’ll know she didn’t really do it. Danny will go upstairs and have a heart to heart with her and then he’ll see the truth, right? NOPE. They all sit downstairs chatting about how earlier kids start experimenting and how they can’t believe what she’s done. Then she gets the lecture a kid who has been drinking deserves–only she didn’t do anything except be in the wrong place at the wrong time.

Literally no one in this loving, supportive, you can always talk to me family believes a single word DJ says except her little sister, Stephanie. DJ has been crying her eyes out for like eternity because no one believes her, so Stephanie marches downstairs and says her big sister is crying in the way that you only cry when you’re wrongfully accused. And suddenly every adult is like: whoops.

Meanwhile, DJ has gotten Kimmy’s mom (Kimmy has parents who are actually involved in her life at this point) to drive her back to school so she can get Kevin to explain to her father what really happened. For some reason, Jesse and Danny need only this twelve-year old child–a relative stranger to them–to corroborate DJ’s story in order for them to believe her. Ugh. So then Jesse is all like sorry DJ, I just know that alcohol has really messed up some of my friends and I totally took that out on you because I love you so much. And DJ is all like yay you trust me again and you were just worried!

Very Special Lesson: It’s okay if someone totally ruins your relationship by calling you a liar and a juvenile delinquent. If they apologize, then you can go back to your loving trusting relationship with absolutely no residual resentment.