It’s Cory’s sixteenth birthday and he’s got big plans to drive from Philly to Atlantic City to see an R-rated movie with Topanga and Shawn. But his dad wants to carry out the family tradition of going to the DMV and then having a big heart-attack-inducing, greasy meal.

Only, Cory doesn’t know about these plans, so he gets his license alone with his friends. Then his dad says he can have the car after her runs a few errands, which will take two hours tops. But he comes back five hours later to an extremely pissed off Cory. Alan offers Cory the keys to his car provided that Cory be back in time for his birthday dinner in 45 minutes. Cory is livid because he hadn’t agreed to a birthday dinner and now he has no time for his road trip. But they’ve been having a birthday dinner every year of Cory’s life so Alan doesn’t understand  what the fuss is about. Eric tries to tell Cory that his dad is just upset because Cory is his last son. But Cory is an insensitive teenager, so he tries to ditch his own birthday party. 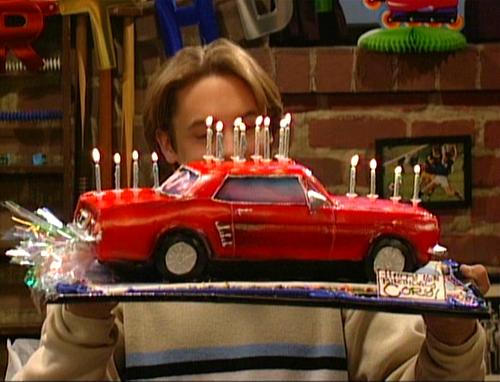 When Shawn tells Alan that they’re trying to make a movie and need to leave the party, Alan informs them all that they have to be seventeen to see an R-Rated movie. And when he finds out they were trying to go to Atlantic City, he freaks out. And Cory freaks out too and is all like meh I just turned sixteen and that makes me an adult, and I want to leave my party and hang out with my friends. And Alan is all like really? “That’s the first ‘adult’ decision you want to make?” Hint: It’s not very “adult” to ditch the party your entire family is throwing for you.

So Cory, Shawn, and Topanga head to Atlantic City. But Cory gets pulled over for going 26 mph in a 25 mph zone. Were they driving through residential neighborhoods the entire way to New Jersey? Refusing to call his father to help him pay the $200 fine, Cory ends up in the traffic version of night court–where he is immediately seen by a domineering judge.

le, Alan is feeling pretty bad about how everything unfolded. Ever the level headed mother, Amy tells him that Cory is just growing up and isn’t doing anything wrong. Alan says that he’s growing up too, and Amy reminds him that he hasn’t done anything wrong either. They’re both just figuring out how to shift into a new part of their relationship. And that’s why this show is so awesome! Mr. Feeney tells Alan about Cory (who has called him instead of his father), and Alan drives down to the courtroom.

The judge (who must have a sixth sense about father’s who are having  a hard time) sees Alan come in and tells Cory that he will drop the charges if Cory calls his father and says he was wrong. But Cory refuses to do so. The judge then sentences Cory to “two years” (of being a kid, thank God!) and tells him to chill out on the being an “adult” thing.

Very Special Lesson: You’ll probably think you’re all done growing up at least a dozen times before you’re actually a grown up.