We first meet Jessica Fletcher as an ordinary widow/substitute teacher whose nephew has stolen her manuscript and published it. She’s suddenly an unwitting celebrity and she seems pretty harmless. It is impossible to tell at this point if her innocence is genuine, or if this was all part of her elaborate plot to gain the trust of millions.

Her publisher rudely brushes her off at first, but then asks her to come to a costume party and spend the weekend at his country house to make up for his rude behavior. Nothing really happens until her nephew, Grady, catches someone snooping in his guest-room. It turns out to be a really classy private investigator. The PI tells Jessica, “You have a rare gift for murder. Continued success.” 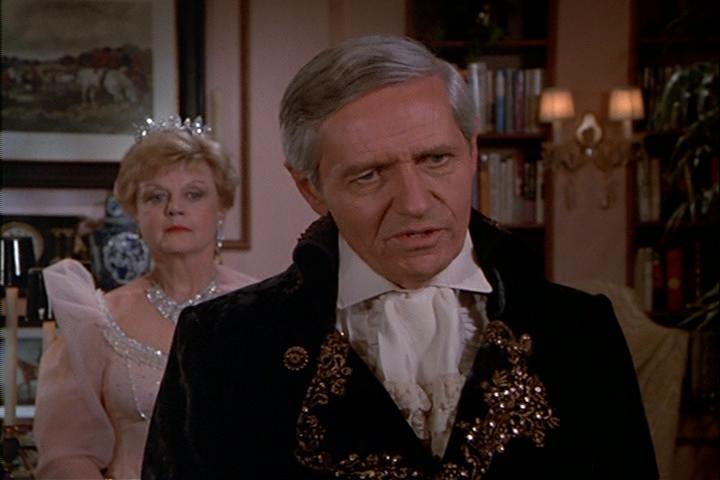 Jessica runs a lot. It makes me feel bad because I am decades younger and exercise way less. I worry my fitness age is actually like 76. But I guess being an old lady serial killer/mystery writer must require peak physical fitness.

Anyway, after all of this exposition and running, something finally happens! A seafood magnate named Caleb McCallen is found dead in the pool. He has been shot in the face with a shotgun. Yuck.  Caleb’s supposed lover, Ms. Donovan, found him at 6 am but he was probably killed during the party the previous night.

JB Fletcher pokes around outside (probably contaminating evidence). She says that Caleb isn’t the one in the pool, based on the shoes (shotgun to the face makes it a little hard to recognize him) Meanwhile, Caleb’s wife blacked out the night before and is now worried she murdered her husband and can’t remember doing it.

I didn’t expect Angela Lansbury to create something so freaking dark. I’m not sure I’d ever seen the pilot episode until now, but let’s review briefly: In a Sid & Nancy scenario, someone’s face has been blown off at an otherwise innocuous party, and this is rated TV-PG.

Anyway, as it turns out Jessica is correct. Caleb shows up alive and well, having spent the night in a motel with a lady friend. He left his costume in the hall closet before leaving the country house, where anyone could have taken it. It also turns out that Caleb hired the PI because someone was leaking confidential information about his business. Then Grady gets arrested! They think he’s a thief and that he tried to kill his boss (Caleb). At 11:15 pm (the time of the murder) the other chief suspect was upstairs “half-naked” while Jessica washed out a stain from her dress.

At the beginning of Part 2 of the pilot, Jessica goes to see Caleb in Bay Shore and he is all like your nephew is the culprit! So Jessica makes Grady help her break into Caleb’s office to find out who bought/sold some overpriced properties. Once in the office, Jessica and Grady split-up (a.k.a. Jessica needs some alone time to plant evidence). Then the other suspect (the one with the alibi) comes into the office. Jessica spies on her from a coat closet.

The suspect takes a phone call and says, “I want no part of murder. They may be following me. I can’t be sure.” Why would you talk about murder if you were maybe being followed? Only a totally innocent person would do that! She leaves shortly thereafter and Jessica watches her get on a bus. Jessica catches another bus going the same way, but she doesn’t have exact change. The Fratelli mom from The Goonies gives her 3 quarters for a dollar and she takes the bus to 3rd Ave and E 17th where some dudes try to rob her.

Some guy who followed her off the bus and saves her from certain death. He tells her he’s a big fan of her book and says, “You want some advice? I’d stay out of this neighborhood, Mrs. Fletcher.” I know this is the 80’s but this is Gramercy! Geez!

Jessica calls the cops and says she now thinks the PI was the intended victim and that they must find a connection between off-B’way producer Peter Brill (form the party) and Ashley Vickers (the lady with the alibi). Like what? I’ve been watching this whole time and follow literally none of her logic. I’m sure she’s just trying to confuse everything to hide her own guilt.

Anyway, Jessica goes to the theater and Ashley Vickers shows up and is all like Give it up, Peter!!!! And Peter is all like, I also have an alibi since I played the piano all night in front of everyone. So they’re thieves but obviously not murderers, and this leads Jessica Fletcher to find a new scapegoat to frame for her crimes. 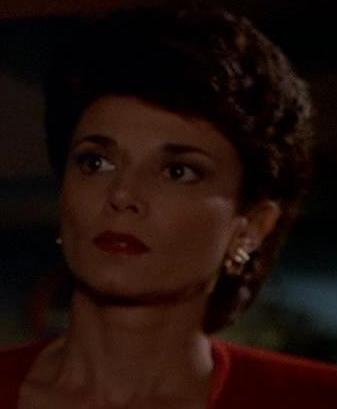 Shortly, thereafter the cops find Caleb dead on his boat. For some reason, Jessica goes back to the country house and tries to break into a shed by the pool. Her publisher shows up, and she tries to claim that she can see him perfectly at the same distance that the killer must have been at from the PI. Thus, there’s no way the PI could have been mistaken for Caleb. She accuses her publisher of being the killer and he confesses that he was in a “blind rage.” He says he was scapegoated in a “business venture” where the building collapsed, even though he had nothing to do with construction. He went to jail for fifteen years and everyone else got off scott-free. After two years, he escaped and the police figured he was dead. And the PI recognized him. This all seems pretty damning, but I’m sure Jessica is responsible.

Here’s what really happened: The publisher has PTSD from the trauma he’s experienced with both jail and his dangerous escape. This PTSD must have been triggered by the automatic lights near the pool, sending him into a “blind rage” but not a murderous one. Jessica Fletcher witnessed all of this from the upstairs bathroom where she was washing the dress. She scaled down the trellis (fit from all that running), and seized the moment to create a new mystery for herself. Then she manipulated this poor man into thinking he was a murderer all because she needed to be the hero. Becoming a published mystery author was just too thrilling for this small-town retiree, and now there’s nothing that can satiate her need for crime. But why this poor, unwitting PI? Well, he was the only one who astutely observed her true character and properly foreshadowed her “rare gift for murder.”

2 thoughts on “Murder, She Wrote: The Murder of Sherlock Holmes”