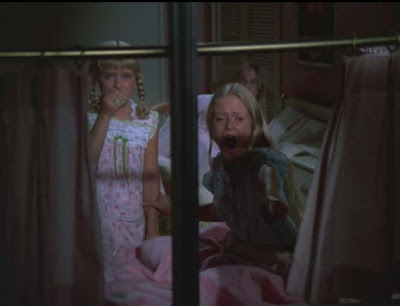 It’s Halloween-time in the Brady home and the two youngest Brady girls are certain they’ve seen a ghost. And they insist that they heard it in the attic too. I feel like they really should be more skeptical since they all worked together to make their house seem haunted a few years earlier.

Mom & Dad Brady head up to the attic to investigate and discover a rocking chair blown by the wind coming through an open window. (Hence the “ghost noises”). Having solved the mystery, they send the girls back go bed. Mom kisses Cindy goodnight and Dad kisses Marcia. No one kisses Jan. 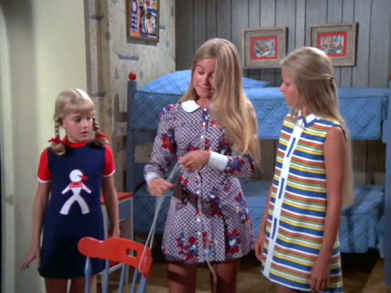 Carol & Mike over-hear the boys laughing in their room down the hall, and realize who the “ghost” is, but you know kids will be kids so who gives a crap. Marcia never believed the ghost was real and has already deduced that the boys are to blame. So she encourages the girls to sneak around and look for evidence. They find a slide projector and discover that they have a slide of one of the boys wearing a sheet. Okay, so Jan and Cindy aren’t so dumb. I mean a slide projection in the middle of the night would be pretty creepy. So the next night at dinner, the girls trick the boys into spending the night in the attic. They bet their allowance that the attic is haunted, and of course the boys accept the bet–thinking that the girls are idiots. Mom and Dad Brady permit this to happen because they’re always 2 steps ahead of their children and figure the girls are plotting to get even. The Bradys love some good, healthy plotting.

So the girls records some creepy voice over stuff and make some plastic ghost thing hover around the attic. Bobby and Peter are totally freaked out and evacuate the attic, thus losing the bet. Only by that time Bobby and Peter are so scared, they don’t even care. They’re worried that Greg is dead because he didn’t follow them out of the attic.

But Mom and Dad Brady have realized that this has gone to far and they all head up into the attic to discover that Greg has figured out the girls’ trick. The Brady parents ban any further pranking, but they do let the girls keep the boys allowances. That seems pretty fair since the boys started this whole thing and they figured the whole time that the girls would prank them back. 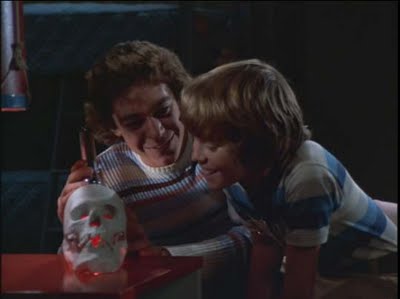 So then they all join forces and decide to scare Alice. This just goes to show that the Brady kids are really total jerks. This woman cooks for them, cleans up after them, gives them prime life advice, and–in Jan’s case–saved her from near certain depression by showing her even an iota of attention. Basically, Alice is a freaking saint and this children are assholes.

But don’t worry, they get what they deserve. They screw up the timing so it’s their parents who arrive home first, not Alice. Of course, they see through this shenanigan immediately but it’s very dark in the house, so they have to track down the kids. Mrs. Brady stupidly leaves her prize-winning bust of Mr. Brady’s head on that partial wall divider that goes around the back of their couch, dividing the living room from the entry way. Well, to be fair the house is super dark–so maybe she thinks it’s safest where she knows she won’t trip and fall while carrying it. The only problem with that plan is that Alice arrives home while the lights are still out and thinks a creepy man is sitting on the Brady’s couch. So she shatters the bust to pieces with one swift blow to the back of the bust’s head. Then the Brady kids learn their lesson because they’re not actually total assholes.

Halloween Lesson: If you have nothing better to do with your time then terrorize your housekeeper/friend then you’re a jerk. It’s Halloween. Be more inventive.