Things start off ominously in this episode of The Baby-Sitters Club. There’s a sketchy haunted house and Claudia is being super cryptic about something. Actually, it turns out she’s failing out of middle school. Her mom’s set her up with a tutor but she’s going to have to miss out on some BSC meetings. No big deal though, she can just explain the situation to her friends.

Anyway, Dawn and Stacey end up babysitting for this kid who is obsessed with dinosaur fossils. He wants to go hunt bones in the backyard because there are a lot of them by Mrs. Slade’s house. Dawn and Stacey are like wtf?? And this kid is just like, “She’s a witch lady. She talks to animals and turns people into dogs.”

So the baby-sitters decide to take the kids outside to investigate. Yep, that’s right, the people you trust to keep your children safe while you are at the mall are taking them on a literal witch hunt. They evacuate the woods when they find a sick looking dog and a hear strange noises coming from the general vicinity of Ms. Slade’s house.

Then they go to the hardware store to meet the other babysitters! “I just love hardware stores,” Stacey says, “next to Bloomingdale’s there’s no place I’d rather be.” Uh, yeah. Okay. As it turns out, Mrs. Slade is also shopping in the hardware store. She’s purchasing some really creepy stuff too: a lantern (for working late at night) and a shovel (for digging deep). I mean I think it’s pretty obvious that she’s burying bodies in the night.

That night at their spooky sleepover party, they all tell stories about the scariest thing that has ever happened to them. Mallory’s story is about how she was walking home with a group in the woods and THEY ALL LEFT HER to take the road instead. Seriously, I wonder if they make her super sad intentionally.

Then they start talking about how creepy Mrs. Slade is and Claudia tells them all that her behavior is probably perfectly normal. When they bring up the shovel incident, Claudia says, “so she gardens,” and Dawn calls that the “dumbest thing [she’s] ever heard.” Well, no, it’s definitely the only intelligent thing anyone has said about this poor woman. But Claudia gets her feelings her and storms off. They’re all like geez, I wish I knew what was wrong with her! And I’m just wondering how NONE of them have managed to notice that Claudia has been reading a textbook for the entire duration of this slumber party. They are terrible detectives.

Then Stacey goes back to babysit for fossil kid. This time she has Mary Anne with her. Fossil kid is all like hey look, I can see Mrs. Slade through my telescope! And Stacey is all like,” it’s not nice to spy on people,” but then she pushes him out of the way so she can spy on Mrs. Slade herself. She sees Claudia through the telescope with Mrs. Slade. Mrs. Slade is rubbing some kind of herb on their faces, and even I have to admit that’s weird.

Stacey calls Dawn to get the BSC over to the Slade house to rescue Claudia. Basically, their plan consists of Stacey telling Mrs. Slade that there is a wounded dog in the woods. So Mrs. Slade is going to go looking for the dog, and the girls will seize that opportunity to “rescue” Claudia. Well, this seems extraordinarily cruel but okay. 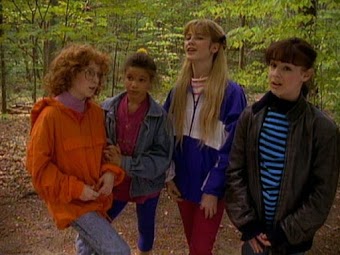 Dawn, Jessi, and Kristy enter the house for the rescue mission. They make Mallory wait outside and watch the door. Claudia hears them poking around and tells them that Mrs. Slade is definitely not a witch. She’s a former vet who is now tutoring Claudia in biology. So now the BSC has sent a veterinarian out looking for a hurt dog and Claudia is basically like you jerks, she will stay out there all night.

So the BSC goes out looking for Mrs. Slade. They’re calling for her and nothing works, so then Claudia has a great idea. “I bet she’ll hear us if we bark like dogs.” So then they all howl and it works. Omg. This is the weirdest episode ever. Then they all have to tell her that they thought she was a witch and that they lied about the dog. But it wasn’t a total loss because Mrs. Slade found a bird who needs to have his wing mended.