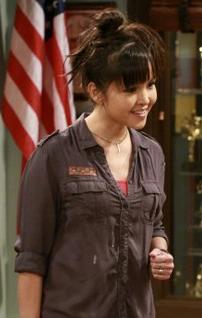 Those rascally kids at John Quincy Adams Middle School have scared off their English teacher! And so they get a lady version of Mr. Turner. She walks into the room wearing leather of the motorcycle variety. Her first English lesson involves handing them all band new copies of Batman: The Dark Knight Returns. So. I would like to sign up for this 8th grade English class please.

Riley, little disrespectful brat, says to the cool new teacher, “Um. Aren’t you supposed to be teaching us the important books?” RUDE. The cool teacher tells her it is important. She also tells the class to call her by her first name, Harper. And that they will “figure out” her namesake.

Alas, this revolutionary teaching is short-lived. The principal sees “comic books” out on the desks and shames Harper into teaching To Kill a Mockingbird instead. I guess those kids will be figuring out that namesake sooner rather than later. But maybe not. Harper defies the principal’s orders and proceeds with teaching The Dark Knight Returns.

At dinner, the girls are so psyched about their homework that they’re rushing through everything. Topanga asks them what’s up and they talk about how cool the new teacher is. Recognizing that they are describing a lady version of Mr. Turner, Topanga asks Cory if he was on the search committee for the new teacher, and he replies that he was. And then they tell their children how they had one teacher other than Mr. Feeny and that Mr. Feeny was that teacher’s principal.And the kids are like No, way would one teacher teach you forever AND be your principal in today’s world. And Cory is all like, “we’ll see.”

The next day the principal fires Harper and won’t even let her explain her lesson plan. To be fair, as a new teacher she probably should have explained her lesson plan as soon as he asked her to teach a different book. But no, she’s a rebel and she decide to just ignore him and continue doing what she was doing. Maya and Riley get Cory to intervene and he’s all like, “how can you possible fire someone like her?” And then he does that whole if she goes, I go thing. So they both get fired.

But Topanga’s all lawyer-y and she’s all like NOPE. A principal can’t fire a tenured public school teacher. Duh. So now the principal will have to take this up with the superintendent, and he can fire both of them. Except, no. He cannot. An independent hearing officer is responsible for dismissing tenured teachers in New York City and it is basically impossible to dismiss a tenured teacher. But fine, since this is the freaking twilight zone of Boy Meets World, let’s just take it up with the superintendent–who happens to be Mr. Turner.

This should be no surprise at all as it seems that literally everyone from John Adams High has made the 90 minute trek up I-95 and relocated to the village. Even those people that we haven’t seen in a freaking decade. So Mr. Turner is all like, “I taught the X-Men on my first day.” And the principal is all devastated that he has clearly screwed up here, but who gives a crap? We’re finally getting the answers we need about Mr. Turner’s post-accident days!

Here’s what he’s been up to:
-He married his nurse
-He hired Cory to his teaching position
-He frequently visits Cory at his home (except Auggie apparently has never met him until he comes over for dinner at the end of the episode)

Then Maya and Riley lurk outside the window because all they care about is spying on the adults in their lives.

Oh well, Mr. Turner does immediately recognize Farkle as Stuart Minkus’s son–no introduction needed–so maybe he was over on the “other part of the school” teaching honors classes.