Corey & Topanga are in the midst of a trial-separation and Shawn is in the middle of their dispute. Meanwhile, a janitor straight out of Tales from the Crypt enters the room to empty the trash. He then does some creepy finger-pointing (at Feeny, maybe? I’m not sure). Then he leaves without saying a word. Cory, Shawn, Topanga, Angela, and some dude named Kenny all get detention for being disruptive in class, but Feeny leaves them alone in the room because he doesn’t want to be stuck in detention too. However, he tells them that they are still “being watched.” Shawn tries to leave immediately after Feeny, but discovers they have all been locked in the classroom. 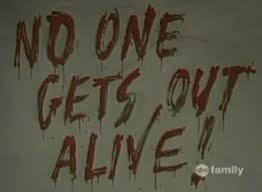 Then the creepy janitor appears again. Instead of quietly sitting in their seats and waiting for him to pass like normal, sane humans, Shawn and Cory decide to ask him to unlock the door. He just holds up the keys, smiles, and turns away. Then the pull down map on the board (remember those? do schools still have those or is everything on the internet now?) scrolls up to reveal “NO ONE GETS OUT ALIVE” written in blood on the blackboard.

Shawn tells the group that Feeny must be trying to pull a prank on them. He says it’s just like all of the horror movies he’s seen, and then starts to list the rules of horror movies like the video store guy in Scream did. He points out that Kenny will have to be the first victim. The tragedy of being on the outside of the clique–sorry, buddy.

But then Jack and Eric show up and open the door. No one asks how they managed to unlock it. I feel like that’s a really important question, but no one seems to care. Eric tells them that he and Jack decided to come to the high school to play basketball–uh, okay–and then they discovered that there was blood coming out of the locker room showers. Shawn says this is just like that classic horror film “Blood in the Showers,” and they decide that Feeny is torturing them with horror movie antics because detention isn’t scary anymore.

Then the lights go out and someone murders Kenny in like 1.5 seconds. That pretty much can only mean that one of our favorite cast members is a psychopath (probably the one standing closest to him) because who else could possible have had that opportunity? But he was also murdered with a pencil to the forehead, so I guess we’re assuming a lot of things are possible in this universe.

But Shawn still says it’s all just a prank. Only, Feeny ends up dead too. Wait. What? NO. Ugh, this is all Shawn’s fault. He made Feeny was the first suspect, which makes him a red herring, which makes him the most likely to die. Then we find out which of the group are virgins because Shawn says they’re the only ones who will survive. (FYI Cory & Topanga are safe, duh. Shawn says “I’ll get as sick as you can get without actually dying” and Jack & Eric are dead. Angela doesn’t comment.)

Then Topanga yells at Shawn and says that he was wrong about Feeny, so he’s probably wrong about this entire thing. And Sean is all like, “You were wrong to break up with Cory.” OMG, Shawn, people are DYING. Give the teen romance crap a break for 2 seconds! Then he blames her for the entire horrific event saying that none of this happened when she and Cory were dating, ergo John Adams High turns into a horror movie bloodbath when they’re not together. Good to know the entire balance of the universe is in the hands of two neurotic teenagers. When the janitor ends up dead too, the group has to accept that the killer is one of them (which I knew ten minutes ago, geez.) But Topanga insists that there must be someone else in the building, so they leave Eric out as guard/bait while the rest of them hide in the classroom. Just then, Jennifer Love Hewitt shows up and she and Eric make out. (This was back when they were dating in real life.)

Then the pay phone rings and Jack answers it. It’s the ghost face killer from Scream! And poor Jack is just as friendly and innocent as Drew, answering the creepy questions all friendly like. Then they all split up, to lower the chances of the killer finding them all at once. Then Jennifer Love Hewitt dies when the killer pushes like five books at her. These people are so fragile. But then Eric dies the same way!

Angela and Jack die next, when the killer pushes them out of a window. Now only Cory, Topanga, and Shawn are left facing the killer. Shawn unmasks him and discovers his own face is under the mask. It’s like super trippy. Clearly, this is all just a dream. But Shawn’s obviously really enmeshed with Cory & Topanga. I guess we already knew that though. Also, that means that Shawn was dreaming about who out of his friends is/is not a virgin. The end!

Halloween Lesson: Don’t ever get so involved in your friends’ relationship that it haunts your dreams.

One thought on “Boy Meets World: And Then There Was Shawn”